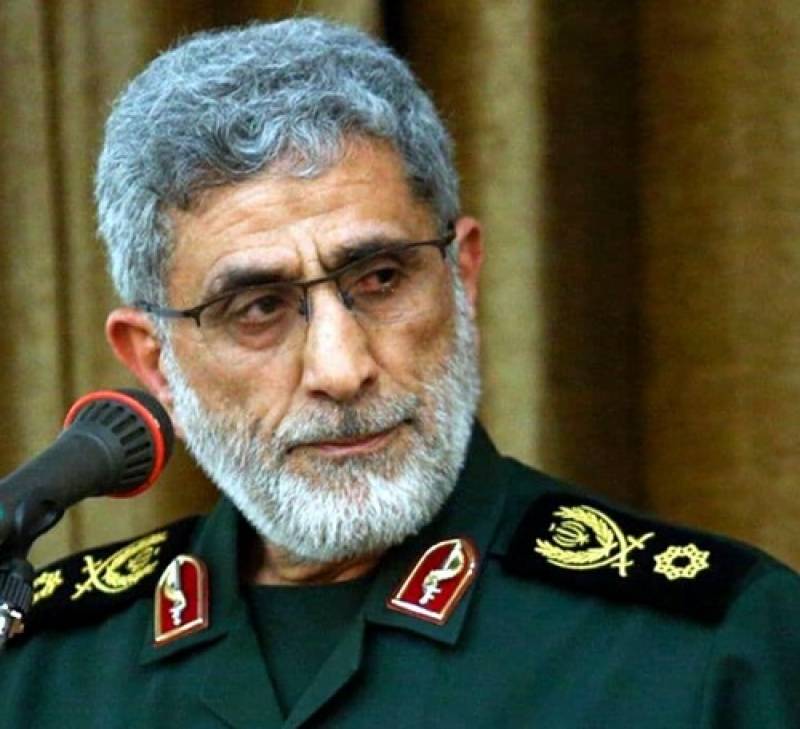 TEHRAN (Agencies): The head of the Quds Force of the Islamic Revolution Guards Corps (IRGC) says it is time for the Israelis to think about leaving Palestine and redeem their homes in Europe and the US.

General Ismail Qa’ani’s remarks at a ceremony in Tehran Saturday on the 40th day since the passing away of his deputy Brigadier General Mohammad Hejazi came in the wake of the recent 11-day Israeli war on Gaza which marked an unprecedented show of force by the Palestinian resistance.

“In the first three days of the Palestinian war with the Zionist regime, we fired as many missiles at the occupied territories as the entire 22-day war. This is the power of the Resistance Front,” General Qa’ani said, referring to the war that began on December 27, 2008. According to the general, “more than 3,000 missiles fired by the resistance into the occupied territories were produced in the same geographic area” which was pulverized in 2008 under a ferocious Israeli aerial campaign and came to be known as the Gaza massacre. “From now on, the message of the resistance to the Palestinian children is that ‘your plans must be for the administration of the whole of Palestine’, and without a doubt, the Zionist regime must think of a time when this land will no longer be under their control,” General Qa’ani said.

“I advise all Zionists to go back and buy your own houses again before the houses you sold in Europe and America and elsewhere and came to the land of Pal-estine become more expensive than they are today.” Israel launched airstrikes against Gaza on May 10, after Palestinian retaliation against violent raids on worshipers at the al-Aqsa Mosque compound and plans to force a number of Palestinian families out of their homes at Sheikh Jar-rah neighborhood of Jerus-alem al-Quds. “The Palesti-nian resistance acted in su-ch a way that from the first day, the Zionist regime be-gged the intermediary cou-ntries to call and press for the Palestinian children to stop the war,” Qa’ani said.

The Palestinian resistance, he said, set preconditions and did not give up until dictating all its demands to Israel.

“It might be interesting to you because this is not being said in the media; the heaviest bullets of the Palestinian resistance were the last bullets fired at the occupied territories, which is a sign of the power, strength and the correct definition of resistance,” Qa’ani said.

The Quds Force chief also paid tribute to Gen. Hejazi and Iran’s legendary commander General Qas-sem Soleimani, saying they were key to the unprecedented strengthening of the Palestinian resistance.

“General Hejazi was one of those who, along with Haj Qassem, put a lot of energy into filling the hands of the resistance, and a token of the services rendered by Martyr Hejazi and Haj Qassem was seen in this fierce resistance of the Palestinians against the Zionist regime,” he said.

“The Eminent Leader [Ayatollah Seyyed Ali Khamenei] has said that ‘Martyr Soleimani filled the hands of the children of the resistance’ and we saw how Gaza is defending the whole land of Palestine despite having been under sanctions for 15 years.”

Gen. Qa’ani said, “Today, all over the world, thanks to martyrs such as Haj Qassem Soleimani and Martyr Hejazi, everyone believes that resistance is the answer in every scene.”

“As someone who has been with the children of the resistance and seen and known their spirit, I must say that gone are the days when the Zionist regime wanted to destroy the Palestinian children with weapons, bullets and guns. Today, these children are producing in the occupied territories all the vast means which they used in the 12-day war.”

According to the Quds Force chief, “many infrastructural facilities in the occupied territories were within the range of Palestinian missiles” during the recent war, but the resistance groups did not hit them, knowing it will not take long before they use those facilities.