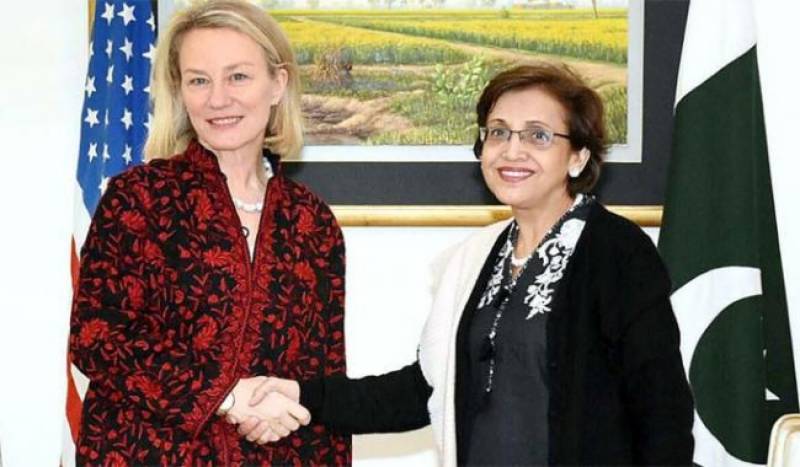 ISLAMABAD: The Foreign Office says Pakistan and the United States have resolved to act against all militant groups that target Pakistan and neighbouring Afghanistan.

In a statement Thursday, the Foreign Office said the understanding was reached during a meeting between visiting US Acting Assistant Secretary of State Alice Wells and Pakistan's Foreign Secretary Tehmina Janjua, foreign media reported.

Wells was in town when an announcement was made regarding a visit to Kabul by Prime Minister Shahid Khahkan Abbasi. Wells will also meet other senior officials during her stay. The main thrust of the deliberations was Afghanistan and the recent “momentum created by peace initiative by President Ashraf Ghani and follow up in Tashkent”.

Earlier, Foreign Minister Khawaja Asif, speaking in Tashkent, had reiterated Pakistan's support for Ashraf Ghani's national peace and reconciliation plan, unveiled during Kabul process meeting, and his offer of peace talks to the Taliban under an Afghan-led and Afghan-owned process.

He said that there was a need to put collective pressure on Taliban to avail this opportunity to shun violence and join the peace process. “These meetings are part of the positive engagement between the two countries for finding out common grounds on various issues including countering terrorism, FATF and Afghan problem,” spokesman at the Foreign Office told the weekly media briefing. Noting that the US and Pakistan had a long track record of cooperation, Ambassador Wells emphasised the importance of working together to achieve the common objectives of peace and stability in Afghanistan and the region.

“The two sides agreed to continue bilateral engagements at all levels,” added the Foreign Office. On Alice Wells’s last visit, while the Foreign Office kept silent, the US Embassy had stated, “Wells urged the government of Pakistan to address the continuing presence of the Haqqani network and other terrorist groups within its territory”.

Thursday also saw Pakistan handing over a dossier to the Embassy of Afghanistan in Islamabad. “The dossier contains evidence of the involvement of Afghanistan-based TTP in the suicide bombing at a Pak Army unit in Swat and the presence of TTP, JuA and other terrorist groups’ hideouts in Afghan territory,” said the spokesman.

The Afghan side was asked to take effective action against terrorist hideouts from where they have been financing, planning and undertaking cross border terrorist attacks on Pakistani military posts, cities and towns.