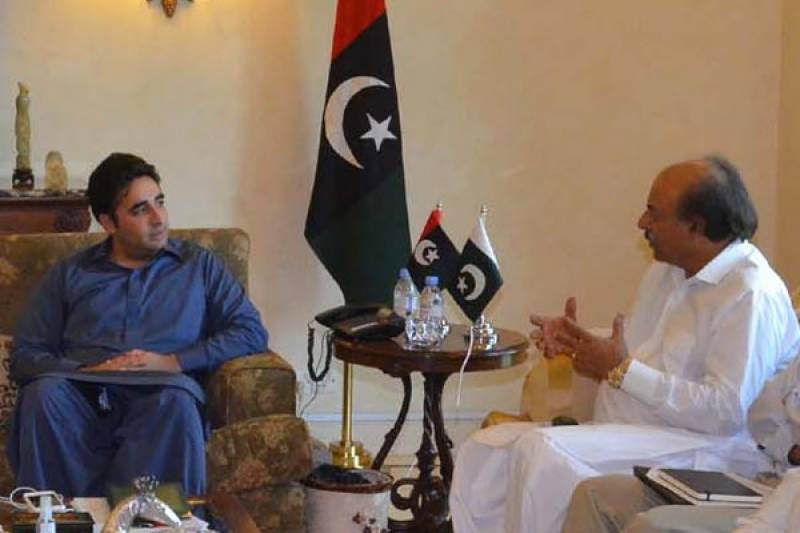 KARACHI: (APP) Chief Minister Syed Murad Ali Shah along with his newly-inducted cabinet members called on Chairman Pakistan Peoples Party Bilawal Bhutto Zardari at Bilawal House here on Saturday and pledged to give maximum performance upto to confidence of leadership and expectations of the people of Sindh province.

Talking to the provincial Chief Executive and his cabinet, Bilawal Bhutto Zardari told them that he and the Party won't tolerate any delinquency on the part of any Minister and asked for fullest utilization of all available resources to deliver to the people of Sindh and mitigate their sufferings.

Projects and work left at half by the previous cabinet should be completed to move forward the process of development and progress in the province, he added.

PPP Chairman stressed that new Sindh Cabinet should prepare strong homework for implementation of devolution of Ministries and powers to the provinces under 18th amendment.

Seeking equitable share in the federal divisible financial resources and ideas to improve provincial revenue generations without burdening common men should also be among the top priorities, he stressed,

He said that collective wisdom of the newly-elected Local government may also be harnessed for restoring the civic amenities.

Earlier, he congratulated the newly-inducted members of Sindh Cabinet and hoped that they will make all possible efforts to implement the PPP policies for the betterment of masses and the province.

Condemning the bomb blast in Larkana, in which a Rangers personnel Shahid Siyal was martyred and 13 others were injured; PPP Chairman, Chief Minister and his cabinet members also offered prayers for the departed soul.