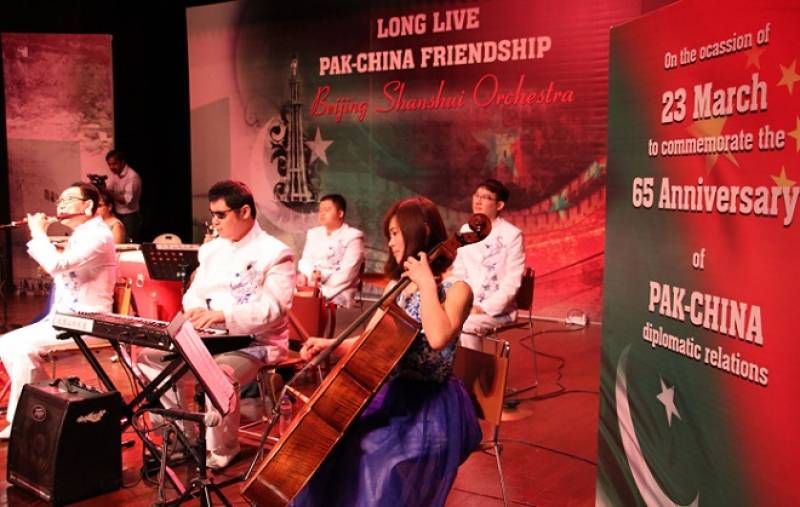 ISLAMABAD (APP): A colorfully bright and artistically choreographed Pakistani cultural troupe's performance bedazzled the audience with traditional dances,folk music and songs at the prestigious National Centre for the Performing Arts in Beijing.

To the delight of the audience, the show demystified Pakistani folk dance and traditional melodies with exquisite tunes and moves.

During the acoustic drumming called 'dhol' a fusion of modern and folk rhythms and beats played with ambidextrous finesse impressed the audience.

"Pakistan and China are celebrating this year the 65th anniversary of their diplomatic relations and this performance was part of those celebrations. The festive atmosphere aptly depicts the friendliness and warmth which the people of the two countries have for each other," Ambassador Masood Khalid of Pakistan said following the show.

Kamran Lashari, the Chairman of the Art Council and leader of the troupe said that owing to the unique relations between the two countries, doing a show in China had always been on top of the wish-list of the performers who have demonstrated their artistic skills in many other countries abroad.

"The feeling is exhilarating when we get such overwhelming applause from the Chinese audience. No doubt we are the 'iron brothers,'" the beaming leader remarked excitedly after the show.

The troupe was brought along by Pakistan's Punjab province's Chief Minister Shehbaz Sharif with his delegation to China. Sponsored by China Three Gorges Corporation and China Cultural Heritage Foundation, the show was organized by the Embassy of Pakistan in Beijing.