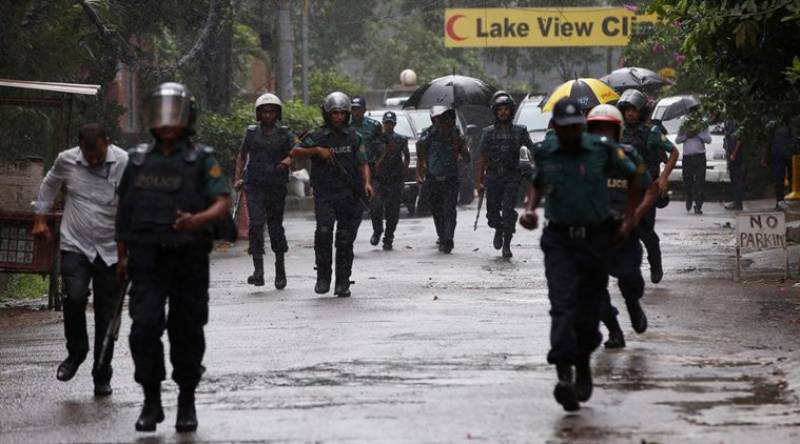 DHAKA (APP) - A Canadian citizen was one of the masterminds behind a mass killing at a Dhaka cafe, Bangladesh police said Saturday, after new information came to light following a raid on an extremist hideout.

Tamim Chowdhury, whose whereabouts are unknown, returned to Bangladesh from Canada three years ago. He has since led and financed efforts to radicalise young Muslims, officers with knowledge of a probe into recent attacks told.

The dual Canadian-Bangladeshi national, in his early 30s, is thought by counter-terrorism officials to lead a faction of the Jamayetul Mujahideen Bangladesh (JMB) militant group, blamed for scores of murders of foreigners and religious minorities.

A week later, gunmen attacked an Eid prayer gathering of 250,000 people held to mark the end of Ramadan, killing three.

"So far what we learnt is that Tamim Chowdhury is one of the masterminds of the attacks of Gulshan cafe and Sholakia Eid prayer ground," an officer told on condition of anonymity.

"He trained the extremists behind the two attacks and the nine extremists killed at Kalyanpur," the officer said, referring to a shoot-out by police at a flat used as an extremist hideout on Tuesday.

He added that Chowdhury "has been working to radicalise" young Muslims.

Another senior police officer told that Chowdhury's role in fostering extremism was revealed during the interrogation of Rakibul Hasan, 25, who was arrested in the raid on the hideout.

According to a police first information report into the raid,Chowdhury and others gave him and the nine militants killed in the raid "money, explosives and weapons" and "trained and advised" them.

Hasan told police during the interrogation that Chowdhury "used to visit the extremists' flat and give them necessary funds and encourage them by talking about jihad and religious issues," the report said.

Authorities blame the JMB militant group for the attack on the Holey Artisan Bakery in Dhaka and the assault on the Eid gathering.

However, the Islamic State group has claimed responsibility for the cafe attack, releasing photos of the carnage and of extremists posing with the group's flag.

Arrested extremist Hasan told police the group busted in the raid were members of IS, with officers recovering its signature black flags and robes from their hideout.

But the national police chief A.K.M Shahidul Hoque has rejected that claim, asserting that they were members of the banned JMB.

Police are investigating whether the JMB faction allegedly led by Chowdhury has any ties with IS.