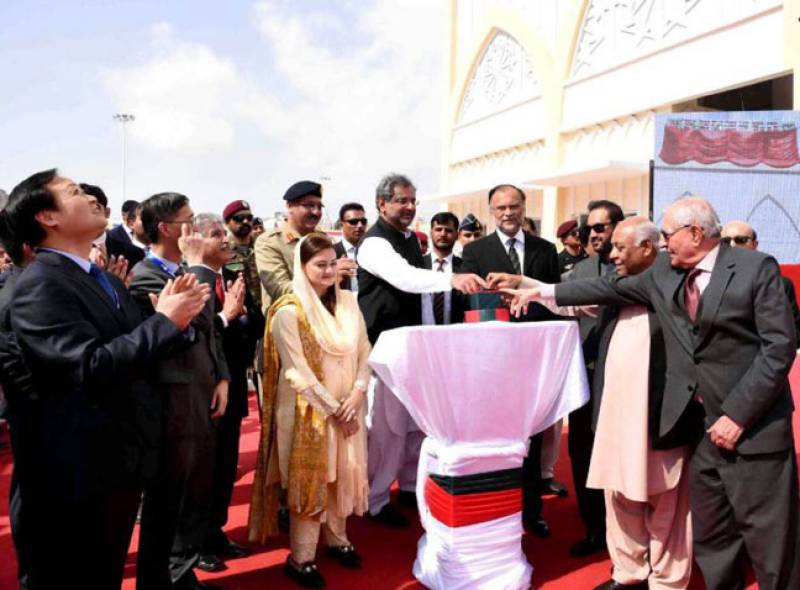 Pakistan today accomplished another milestone and transformed the dream of CPEC into a reality by making the Gwadar Economic Free Zone operational.

Addressing the ceremony, the prime minister reiterated that the ongoing policies of economic development would continue, no matter which party forms the next government.

Shahid Khaqan Abbasi termed the China-Pakistan Economic Corridor (CPEC) a “game changer” and said the potential of Gwadar has been fully realized, owing to the vision of President Xi Jinping and former Prime Minister Nawaz Sharif.

He said due to the dedication and hard work of Pakistani and Chinese teams, both the CPEC and Gwadar are heading towards a bright future.

The prime minister said that the ongoing modernization of the railway system from Karachi to Peshawar, Khunjerab to Gwadar, upgrading of road network, building of necessary infrastructure, building of power projects and setting up of Special Economic Zones are to bring prosperity to the people through generation of economic activity, increase exports and creation of jobs.

He said connectivity through Gwadar will bring prosperity not only to Central Asian States, Western China, Afghanistan but also for Pakistan.

He said the CPEC projects are based on financial viability and environmental sustainability and bring prosperity.

The prime minister also appreciated the Gwadar Port Authority, Gwadar Development Authority and the Chinese partners working on the project and said it will bring prosperity to Balochistan and the region as well.

Addressing the challenges of Balochistan, the Prime Minister said the future of the province is in the hands of its political leadership.

He said there is an urgent need to transform Gwadar into an international city, which is fully functional and can serve the future demands of its people.

He said the federal government will equally share in the equalization package for Gwadar so as to provide quality services in health, education and other social sectors for the people of Balochistan. He reiterated that the country will hold its next general election in July, after the completion of the five-year term of the PML-N government.

Addressing the ceremony, Minister for Planning and Development Ahsan Iqbal said completion of first phase of Gwadar Free Zone was a major milestone towards achieving inclusive and sustainable development in Balochistan in line with Pakistan Vision 2025.

He said Gwadar port and the free zone projects are demonstration of the time-tested friendship between Pakistan and China.

Federal Minister for Maritime Affairs Hasil Khan Bizenjo said main objective of holding the Gwadar Expo 2018 is to highlight the significance of Gwadar.

Addressing the ceremony Chief Minister Balochistan Abdul Qudoos Bizenjo said Gwadar Expo is a significant step towards the economic development of the port city and of Balochistan.

Earlier, speaking on the occasion, Chinese Ambassador to Pakistan, Yao Jing said that his country will continue to support Pakistan for further progress and prosperity.

He said the Chinese companies are being encouraged to invest in Pakistan and with the cooperation of both the countries, projects in Gwadar will contribute to the prosperity of the region.