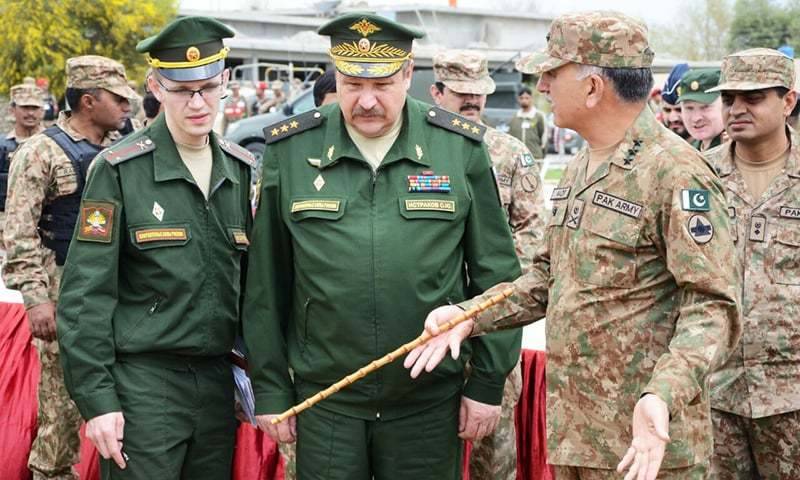 MOSCOW - Islamabad wanted to further enhance its cooperation with Russia and strengthen ties in various areas, including counterterrorism, Pakistan Ambassador to Russia Qazi Khalilullah has said.

[image: Joint drills between Russia and Pakistan] "Pakistan is fully capable of combating terrorism on its soil. We have proven this to the world through 'Zarb-e-Azb' and 'Radd-ul Fasaad' operations against terrorists and extremists … Our [operations are] a success story. Pakistan has gained a wealth of knowledge and experience while successfully combating and eliminating terrorism. We are willing to share it with others,” the diplomat noted, adding that the country intended to boost defense industry cooperation with Moscow and was studying various systems of Russian weapons for new purchases.

"Russian weapon systems compete well with the similar systems produced by other countries and are looked at favourably by defence planners in Pakistan. The Armed Forces of Pakistan are therefore in the process of evaluating various Russian weapon platforms for possible procurement," the diplomat said.

Khalilullah noted that cooperation between Pakistan and Russia in the defense sphere had been steadily increasing and was marked by frequent high-level contacts. [image: Qazi Khalilullah]

"We wish to further deepen cooperation with Russia in this important field," he concluded.

The envoy continued by saying that Islamabad intended to participate in the next meetings of the Moscow format dialogue on Afghanistan and in the Shanghai Cooperation Organization (SCO) joint anti-terror military exercises dubbed the Peace Mission-2018, which are due to take place in Russia in September.

“I understand that Peace Mission-2018 is being held within the framework of Shanghai Cooperation Organization (SCO). Pakistan attaches importance to all SCO activities. We therefore participated in the 1st round of expert staff talks relating to Peace Mission-2018, held in Ekaterinburg in November 2017, and intend to participate in the exercise this year,” Khalilullah said.

The ambassador added that the defense industry cooperation between Pakistan and Russia had also steadily increased amid frequent high-level contacts.

“Military-technical cooperation between Pakistan and Russia has also strengthened over the years. We wish to further deepen cooperation with Russia in this important field,” the diplomat said.

On Pricing of Russian Gas

The senior official noted that Moscow and Islamabad had not yet agreed on tariffs for the North-South gas pipeline in Pakistan, the sides were planning to hold the fifth meeting of the Joint Coordination (JCC) in Moscow in February.

“It is one of the open issues,” the ambassador said, when asked whether the sides agreed on tariffs.

[image: Sections of gas pipes are seen at the start of construction on a pipeline to transfer natural gas to Pakistan.] Khalilullah noted that there was “no room for speculation” about the project’s future, stressing that Russia and Pakistan remained committed to the implementation of the pipeline agreement, though “work remains to be done on issues that are still open.” He also added that the both sides’ commitment was proved by multiple bilateral meetings, including the fifth JCC meeting that was due to take place in February.

“Let me add that there is a Joint Coordination Committee (JCC) for monitoring implementation of the North-South Gas Pipeline Project. It has already held four meetings. The 5th meeting is expected to be held soon in Moscow. Both sides will review the status of the project during that meeting … Hopefully [the meeting will take place] in February. It was scheduled to be held in December 2017, but was postponed to the beginning of 2018,” Khalilullah said.

The intergovernmental agreement on the gas pipeline construction was signed by Russia and Pakistan in 2015. The project is implemented by RT-Global Resources, part of Rostec corporation.