Kashmir rises against the martyrdom of its sons at hands of Indian Army
30 Jan, 2018 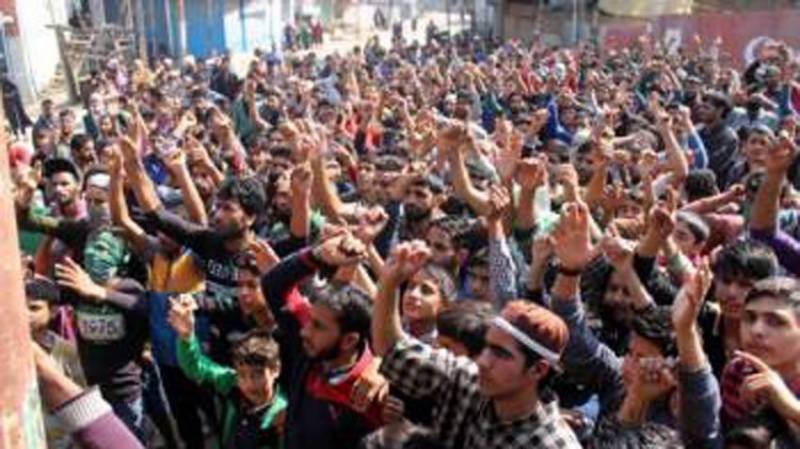 SRINAGAR - In occupied Kashmir, a peaceful protest demonstration was held in Srinagar, today (Tuesday), to condemn the killings, cordon and search operations carried out by Indian forces in Shopian, Pulwama, Kulgam and Islamabad districts.

In a statement referring to Delhi High Court’s report on the ill-treatment of the detainees lodged in Tihar jail, the Joint Resistance Leadership comprising Syed Ali Gilani, Mirwaiz Umar Farooq and Muhammad Yasin Malik expressed concern about the safety of the inmates.

A three-member committee, constituted by Delhi High Court, in its report had said that the prisoners lodged in the infamous jail were living under constant fear of getting killed on one pretext or the other. The report mentioned that in November, Shahid Yousuf, the son of Syed Salahuddin, was hit on his head many times until he started bleeding. Four other Kashmiris were also tortured and thrashed by police.

Meanwhile, complete shutdown was observed on the sixth consecutive day, today, in Shopian district against the recent civilian killings. Contingents of forces were deployed at sensitive places in the district to prevent protests. Mobile Internet service remained suspended in Shopian and Pulwama districts.