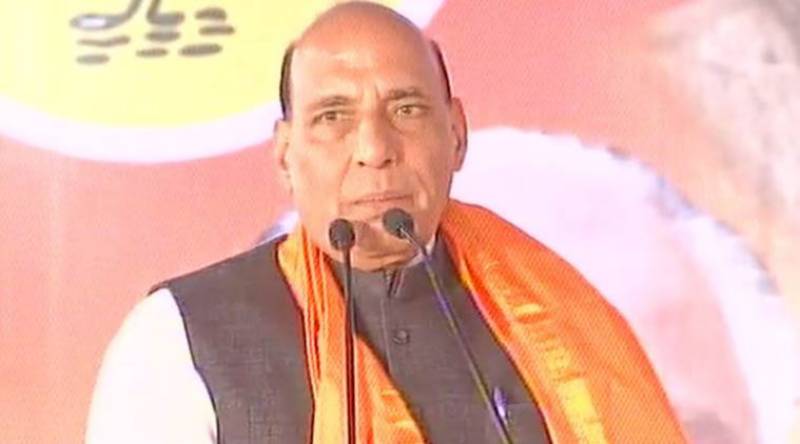 NEW DELHI - Indian Union Home Minister Rajnath Singh on Tuesday slammed Pakistan for continuously violating the ceasefire agreement with India despite giving assurance not to do so, saying Islamabad should not misinterpret “powerful” India’s “decency”. Pakistani shelling along the border in Jammu and Kashmir has increased over the past two weeks.

Fourteen people, including eight civilians, have been killed in the shelling since January 18, according to the state police.

“Three-four days ago, Pakistan Rangers held a flag meeting with our BSF DG. (The Rangers) assured that the ceasefire violation would not take place. But despite this, Pakistan has been violating ceasefire,” Singh said.

“Not saying much, I just want to say our politeness and decency has a limit and we want to maintain good relations with all and also with our neighbors. But our decency should not be wrongly interpreted,” he said.

“India is no more a weak country. India has now become a powerful country.” Singh said Pakistan, being a neighbour, should have a friendly attitude towards India, but added that the fencing of the Indo-Pak border was underway at a rapid pace.

Singh was in Chandigarh to address members of the Bharatiya Janata Yuva Morcha. He was accompanied by Chandigarh MP Kirron Kher and Chandigarh BJP unit chief Sanjay Tandon.

Asked about the case registered against Army personnel following the death of two civilians in firing in Kashmir’s Shopian district last week, the minister praised the Army. “I can say that the situation in Jammu and Kashmir has turned far normal compared to what it was.

Our security forces and Army personnel were working effectively. J&K is ours, it will always be ours and people of J&K are also ours,” he said.

To a question related to the 1984 anti-Sikh riots, he said the Supreme Court recently gave a verdict and an SIT was being formed to follow the order.

On January 11, the court ordered to set up a three-member special investigation team to supervise further probe into 186 anti-Sikh riot cases in which investigations were closed. Asked about the incidents of violence over caste and religion, he said all people in India are safe irrespective of their caste, creed and religion.

Asked to comment on a reported statement of J-K’s deputy grand mufti Basher-ud-din that Muslims of India should demand a separate nation for themselves, Singh said: “I also want to appeal to those plagued with mentality of casteism, religion and minority should come out of it and they need to ponder over it. All should believe that we are Indian.” - PTI