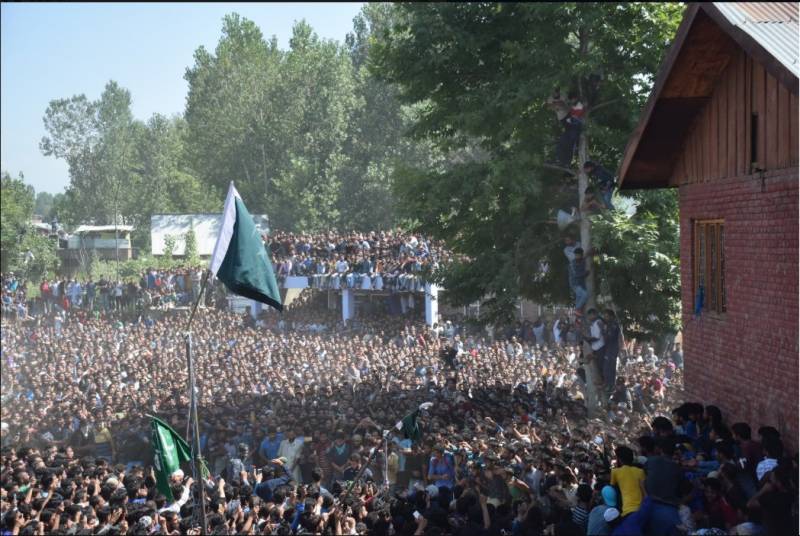 ISLAMABAD: The All Parties Hurriyat Conference (APHC) Chairman, Syed Ali Gilani and other Hurriyat leaders in Indian occupied Kashmir have paid rich tributes to Altaf Ahmad Dar and Umar Rashid Wani, who were martyred by the Indian troops in a cordon and search operation in Islamabad town.

According to Kashmir media service, Syed Ali Gilani in a statement issued in Srinagar condemned the use of excessive force against the civil population leaving scores of men and women seriously wounded. He said, “The military action is a ploy to suppress the people with iron fists.”

The Chairman of Tehreek-e-Hurriyat Jammu and Kashmir, Mohammad Ashraf Sehrai in a statement in Srinagar paid glowing tributes to the two youth and said that the sacrifices of Kashmiri youth would not be allowed to waste and would bring positive results.

The spokesman of Mirwaiz-led Hurriyat forum said Kashmiri youth are offering priceless sacrifices for the Kashmir cause and would continue their struggle till complete success. He also condemned vandalizing the property of mujahideen in various parts of south Kashmir, adding these acts are totally unjustified and reflect the frustration of the Indian forces.

. Hurriyat leader and the Chairman of Jammu and Kashmir Salvation Movement (JKSM), Zafar Akbar Butt in his statement said that the people of Kashmir would continue their peaceful struggle till its logical end.

The JKLF-R leaders, Abdul Majeed Tramboo and Advocate Ayoub Rathor in a statement, paying rich tributes to the martyred youth, reiterated the Kashmiris’ pledge to accomplish the liberation movement at all costs.