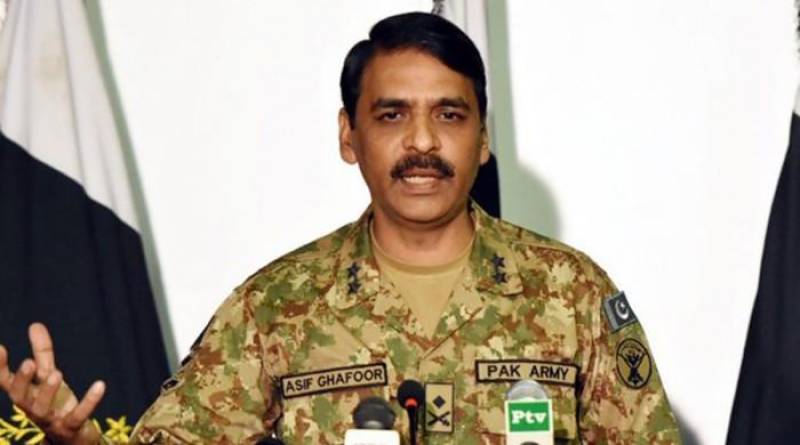 Director General Inter Services Public Relations Major General Asif Ghafoor has said Pakistan Army, with the support of the nation, will respond to any Indian aggression with full force. Addressing a news conference in Rawalpindi this afternoon, he said nuclear power is a weapon of deterrence; however, if aggression is carried out, Pakistan has the right to use any weapon in its defence.

The DG ISPR said instead of reacting to Indian lies after Pulwama incident, Pakistan behaved responsibly and presented facts, proving false Indian claims about the Indian airstrike in Balakot on February 26 and the subsequent developments.

He said India should keep it in view while planning any aggression against Pakistan. Major General Asif Ghafoor stressed on resolution of outstanding issues between Pakistan and India, including Kashmir and invited New Dehli to dialogue.

He said only peace can guarantee development in the region.

He said Kashmir issue is linked with the ideology of Pakistan and every Pakistani is perturbed over Indian atrocities in occupied Kashmir.

The DG ISPR said it is moral responsibility of Pakistan to continue supporting Kashmiris' struggle to achieve their birth right to self-determination.

Major General Asif Ghafoor said Pakistan will continue playing its role for peace and development in the region, including the Afghan peace and reconciliation process.

He said fencing being carried out on the border with Afghanistan in Khyber Pakhtunkhwa and Balochistan has significantly decreased the cross border firing and incidents of terrorism.

He said fencing is being made along the border with Iran as well under bilateral cooperation so that terrorists from Afghanistan do not use this border.

Regarding the menace of terrorism, the DG ISPR said the security forces have dismantled terrorist network and now there exists no organized infrastructure of terrorism in Pakistan.

He said Pakistan also cooperated with the international community to defeat terrorism and intelligence sharing is being carried out with seventy countries.

Giving update about the actions being carried out under Operation Raddul Fasaad, the DG ISPR said eighty-seven major operations and about one thousand Intelligence Based Operations have been carried out.

He said 64235 weapons were also recovered from terrorists.

The DG ISPR said as the country is close to elimination of terrorism, now extremism needs to be handled effectively.

He said there are over thirty thousand Madaris across Pakistan and about 2.5 million students are getting Islamic education there.

He said the government and the stakeholders have decided to bring Madaris to the mainstream in three phases.

Responding to the demands of Pashtun Tahaffuz Movement, he said the PTM leaders received funds from RAW and Directorate of National Security to stage protests in Pakistan and provoke people against the Army.

Appreciating the responsible role played by the media of Pakistan, the DG ISPR said the media is the most powerful pillar of the state at present.