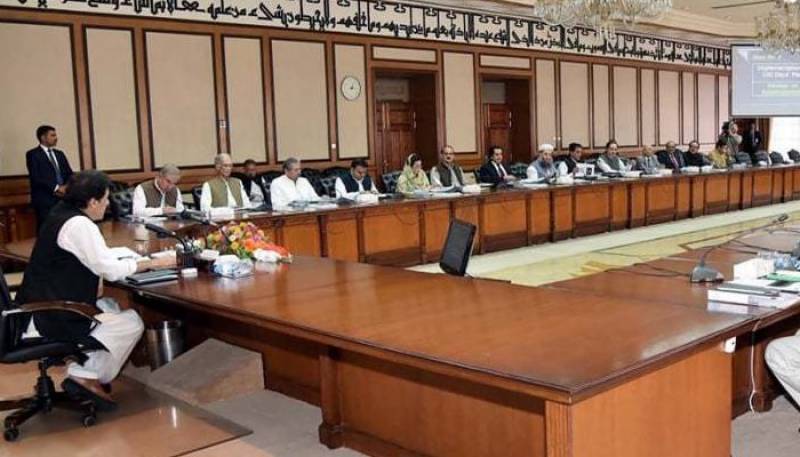 ISLAMABAD - Special Assistant to the Prime Minister on Information and Broadcasting Dr Firdous Ashiq Awan Tuesday said the federal cabinet had given the go-ahead for the construction of Rs 510 billion Dasu Dam after the approval of Executive Committee of the National Economic Council (ECNEC) and work on it would start from next month. Addressing a press conference here to share details of the decisions taken during the Federal Cabinet meeting, she said the construction of Dasu Dam was scheduled to be started in 2014 with projected completion in 2019. But unfortunately, the project to be funded by the World Bank could not be started due to different hurdles. She said the Cabinet discussed the laws related to investment and people-friendly policies. It approved the reorganization of the boards of Sui Northern Gas Pipelines Limited (SNGPL), Sui Southern Gas Company Limited and Government Holdings Private Limited. She said Prime Minister Imran Khan, who chaired the meeting, reiterated his resolve that the Evacuee Property Trust Board (EPTB) land would be used for establishing educational institutions and hospitals. The appointment of EPTB Board was also approved, she added. Dr Firdous said the Cabinet was given a detailed presentation on the Ehsaas Programme, which was taking care of the needs of 95 percent of the poor families. It was decided to grant 50,000 scholarships to the students of needy families in next four years to improve educational benchmarks under the Ehsaas Graduate Programme. About 120 universities would benefit from the programme, which could be availed by the families which were earning less than Rs 45,000 per month. Two percent quota would be for the disabled and minorities. The prime minister would inaugurate the programme in the first week of November. The prime minister wanted to provide relief to the common man, the special assistant said. The Cabinet also approved agreements with Russia. It was decided to take measures against the spread of fake news to avoid speculation, exaggeration and chaos. The Information Ministry would issue an e-letter every week to counter the fake news and present it before the Cabinet, besides sharing it for public information. The Cabinet decided to grant permission for high rise buildings in big cities, including Karachi, Lahore, Peshawar and Multan in line with the roadmap and identification of areas by the Civil Aviation Authority without compromising the security of air traffic. Dr Firdous said investors wanted to make investments in the construction sector, but according to the Civil Aviation Authority (CAA) rules, high rise buildings could not be built close to airports. The CAA briefed the Cabinet about its laws, rules and the best international practices adopted at airports. The Cabinet decided to continue the fund for welfare of artists after handing it over to a ministry. The funds now scattered in the Ministry of Information and the Cabinet Division would be for the artists who had given their best years to the arts. It also reviewed and gave approval of licensing policy for international airlines. The Cabinet also given assent to fill the posts in the National Savings and the Veterinary Medical Council under the Pakistan Medical and Dental Council. Responding to questions, Dr Firdous said the Islamabad High Court had approved bail of Nawaz Sharif for two months on humanitarian and medical grounds in the Al-Azizia case. The special assistant said the government had given the best healthcare facilities to Nawaz Sharif. She expressed the hope that Nawaz Sharif would focus on his medical treatment, adding no application had been received from him for his visit abroad for medical treatment. The government did not know his intentions and would respond when the court would seek its opinion, she added. "We want to see a healthy Nawaz Sharif as our political opponent. Nobody's health should be given a political colour.We are democratic people and will compete in the political field." The National Accountability Bureau (NAB) and courts were independent and free, she remarked and added that the court had the power to grant bail to Nawaz Sharif and it took the decision after listening to the viewpoint of NAB and the medical board of doctors. Dr Firdous said NAB and not the government was the plaintiff in the case of Nawaz Sharif. The government accepted the decision of the high court. To a question, she said the timing of the march of Maulana Fazlur Rehman was inappropriate, who was acting like a stubborn child demanding resignation of the prime minister. She said the matter of Ansarul Islam of Jamiat Ulema Islam was in court. If anybody would take up arms then the state would not remain a silent spectator and protect the life and property of citizens. The government was closely monitoring the rallies of JUI, she explained. She said when the PTI staged the long march, its leaders and workers were arrested but now Imran Khan was acting in a democratic manner. She said the people would expose those who were coming to Islamabad as they were creating chaos in the guise of democracy. Dr Firdous said Maulana Fazlur Rehman was calling the Parliament fake in which his son was also a member, adding the prime minister was elected with the vote of the people and Parliament. The people would disassociate themselves from the the march and would not listen to Maulana Fazlur Rehman whose party had 12 members in the Parliament, she added. To another question, she said Asif Ali Zardari would get medical treatment according to the recommendations of a medical board. She said politicians felt alright when they were doing politics and in jail they got sick. Courts had to decide about the matters related to health of politicians, she observed. Dr Firdous said it was responsibility of the government to ensure job security of journalists. The Pakistan Electronic Media Regulatory Authority (PEMRA) was following its code of conduct, she asserted, adding the prime minister wanted that institutions should strengthen and become autonomous. The cabinet members offered Fateha for the late sister of Foreign Minister Shah Mehmood Qureshi