US General John Nicholson in Afghanistan hits out at Pakistan
29 Nov, 2017 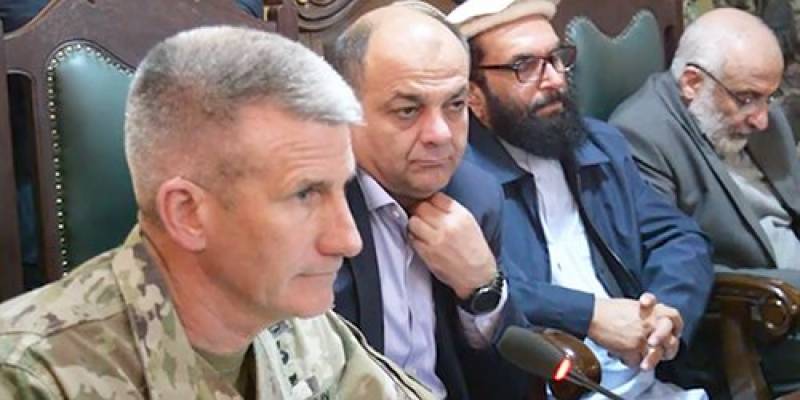 KABUL - General John Nicholson, the commander of US forces in Afghanistan, on Tuesday said the US troops in the country will receive more air power resources in the near future to fight alongside Afghan soldiers against insurgents, TOLO News has reported.  He said the Taliban will not be able to win as the US forces in the country are receiving more air facilities and resources.   "We are ready to fight alongside you, and work with you for peace," Nicholson said in a meeting with Afghan officials in the northeastern province of Kunduz on Tuesday.Nicholson’s remarks come at a time that the US has already tripled the number of air raids on the Taliban hideouts and training camps in the country this year.  According to Nicholson, US also seeks to put more pressure on Pakistan to take solid action against the terrorists’ hideouts and safe havens. “We will get more resources here. We will get even more air power and more resources, this is why we say the Taliban cannot win in the face of this, the other important aspect of this policy you referred is that we are putting very direct pressure on Pakistan to stop…the terrorists who are attacking Afghanistan,” said Nicholson.  “If we convey a clear message to the people that the war which is ongoing today is not Jihad (holy war) but a war of corruption, this would have significant impacts on the mind of those who do not really know that why the war continues in Afghanistan,” said Masoom Stanekzai, head of the National Directorate of Security. “If they (militants) are not willing to give positive response to the slogan for peace, then we will continue our joint efforts against terrorism alongside our international partners,” said acting minister of interior, Wais Ahmad Barmak.   Talking on the US president Donald Trump’s new war strategy for Afghanistan and South Asia, Nicholson said that putting more pressure on Pakistan makes one of the important part of the new war policy to force Pakistan to stop backing and harboring the terrorists.  Meanwhile, Nicholson offered an apology over human casualties in Kunduz last month which was caused by foreign forces air raids in Kunduz.