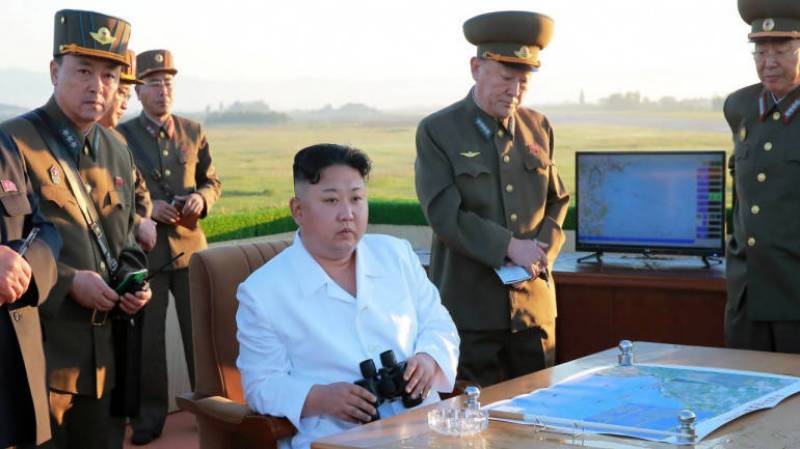 The intercontinental ballistic missile (ICBM) launch snapped a two-month pause in testing by the North and poses a new challenge to US President Donald Trump who has vowed such a capability "won't happen".

North Korean state television brought out Ri Chun-Hee, a senior broadcaster who only appears for significant developments, to announce the landmark.

"Kim Jong Un declared with pride that now we have finally realised the great historic cause of completing the state nuclear force, the cause of building a rocket power," she said.

"The great success in the test-fire of ICBM Hwasong-15 is a priceless victory won by the great and heroic people of the DPRK," she said, using the official abbreviated name for North Korea.

"The ICBM Hwasong-15 type weaponry system is an intercontinental ballistic rocket tipped with super-large heavy warhead which is capable of striking the whole mainland of the US," the official news agency KCNA said.

Pyongyang said the missile reached an altitude of 4,475 kilometres (2,800 miles) and had splashed down 950 kilometres from its launch site.

At least one Western expert said the missile's lofted trajectory suggested an actual range of 13,000 kilometres -- longer than that of any previous test and one that would extend to every major US city.

Trump, who recently announced fresh sanctions on Pyongyang and returned it to a US list of state sponsors of terror, was opaque in his immediate response, as the UN Security Council agreed to meet in emergency session.

"I will only tell you that we will take care of it," Trump said at the White House. "It is a situation that we will handle," he added, without elaborating.

US Secretary of State, Rex Tillerson, stressed that diplomatic options to resolving the crisis remained "viable and open."

It was the first missile test of any kind since September 15, and quashed speculation that the North may have held back in order to open the door to a negotiated solution to the nuclear standoff.

US Defense Secretary Jim Mattis said it marked a significant step toward North Korea building missiles that can "threaten everywhere in the world, basically."

Trump insisted there would be no change to his administration's "maximum pressure campaign" which has sought to curb Pyongyang's nuclear weapons programme with tightened sanctions backed by dire warnings of massive retaliation in the event of any attack.

It was the North's third successful ICBM test and David Wright, an arms control expert and co-director at the Union of Concerned Scientists, said the flight parameters pointed to a "significantly longer" range than previous launches.

"Such a missile would have more than enough range to reach Washington DC, and in fact any part of the continental United States," he said.

While Pyongyang has yet to prove its mastery of the re-entry technology required to bring a warhead back through the Earth's atmosphere, experts believe it is at least on the threshold of developing a working intercontinental nuclear strike capability.

"We don't have to like it, but we're going to have to learn to live with North Korea's ability to target the United States with nuclear weapons," said Jeffrey Lewis, head of the East Asia Nonproliferation Program at the Middlebury Institute of Strategic Studies.

Tensions over the North's weapons programme peaked after Pyongyang conducted its sixth and most powerful nuclear test in September and then fired an intermediate-range missile over Japan.

China, the North's main ally, has pushed for a "dual track approach" to the crisis which would see the United States freeze its military drills in South Korea while North Korea would halt its weapons programmes.

But the North responded defiantly, vowing to continue building up its nuclear force and warning that sanctions would never succeed.

Drumming up support for a tough stance against North Korea's nuclear weapons ambitions was the main focus of Trump's marathon tour of Asia earlier this month.

The US leader spoke by phone with both Abe and Moon after Wednesday's test to underline the global threat posed by North Korea.

Trump is close to Abe, but relations with his South Korean counterpart -- whom he has accused of appeasing Pyongyang -- are far cooler, and there are concerns in Seoul that the US president might be considering military action against the North that could trigger a full-scale war.

"The situation could get out of control," Moon warned during a hastily convened meeting with national security officials on Wednesday.

"We have to prevent such a scenario where the North may miscalculate the situation and threaten us with nuclear weapons, or the US may consider a pre-emptive strike," he said.

Seoul is home to 10 million people and only about 50 kilometres (30 miles) from the border -- well within range of Pyongyang's artillery.