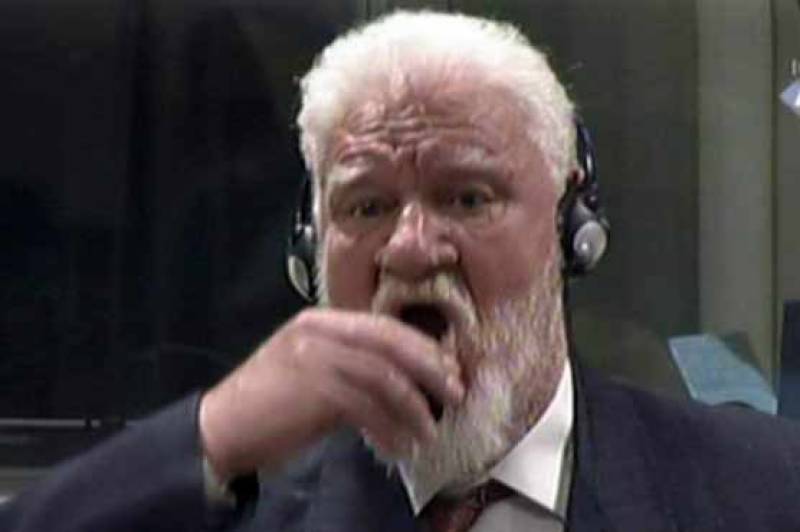 THE HAGUE - In shocking scenes, a Bosnian Croat war criminal took his own life Wednesday in front of UN war crimes judges, apparently drinking poison just after they upheld his 20-year jail term for atrocities committed during the Balkans conflict.

Slobodan Praljak, 72, died in hospital, after drinking from a small brown glass bottle in full glare of the cameras at the International Criminal Tribunal for the former Yugoslavia (ICTY).

As the judges handed down their very last verdict at the court, Praljak, a former military commander of a breakaway Bosnian Croat statelet, shouted out angrily: "Praljak is not a criminal. I reject your verdict."

He then raised a small brown bottle to his lips, and tipped it into his mouth. The hearing was quickly suspended as Praljak s lawyer shouted out: "My client says he has taken poison."

Immediately after sentence was passed on Praljak "he drank a liquid while in court and quickly fell ill," court spokesman Nenad Golcevski told reporters. He could not confirm what was in the bottle.

Efforts were made to give the former film director some medical treatment and he was "transported to the hospital where he passed," Golcevski added.

Hearings at the ICTY are held amid tight security, with all defendants and visitors undergoing strict searches. So it was not clear how Praljak had managed to get the bottle of liquid into the courtroom.

"His act, which we all unfortunately witnessed today, speaks mostly about the deep moral injustice towards six Croats from Bosnia and the Croatian people," he told reporters.

It is not the first time that defendants have taken their own lives at the ICTY. Former Croatian Serb leader Milan Babic killed himself at the UN detention centre in 2006, after another Croatian Serb, Slavko Dokmanovic, in 1998.

In the complex ruling, the judges upheld the jail terms against all six defendants, including a 25-year sentence imposed on Jadranko Prlic, the former prime minister of the breakaway Bosnian Croat statelet, known as Herzog-Bosna.

Praljak was specifically charged with ordering the destruction of Mostar s 16th-century bridge in November 1993, which judges in the first trial had said "caused disproportionate damage to the Muslim civilian population".

A symbol of Bosnia s devastation in the war, the Ottoman-era bridge was later rebuilt.

But in their ruling, the judges in fact allowed part of Praljak s appeal, saying the bridge had been "a military target at the time of the attack."

They also overturned some of his convictions, but refused to reduce his overall sentence.

The bloody 1992-1995 war in Bosnia, in which 100,000 people died and 2.2 million were displaced, mainly pitted Bosnian Muslims against Bosnian Serbs, but also saw some brutal fighting between Bosnian Muslims and Bosnian Croats after an initial alliance fell apart.

The appeal judges said all six men, who had been found guilty of taking part in a scheme to remove Bosnian Muslims from the territory, "remained convicted of numerous and very serious crimes."

In statements sure to anger Zagreb, the judges upheld the original trial finding that the men had been part of a joint criminal enterprise whose "ultimate purpose was shared" by late Croatian president Franjo Tudjman, and other leaders.

The aim of the scheme was to set up "a Croatian entity that reconstituted area borders and that facilitated the reunification of the Croatian people."

Wednesday s verdict comes a week after the judges imposed a life sentence on former Bosnian Serb military commander Ratko Mladic, whose ruthlessness in the conflict earned him the title the "Butcher of Bosnia".

His judgement had also descended into confusion when he accused the judges of lying and had to be dragged away into a nearby room to watch the end of the proceedings.

The ICTY charged Prlic and his co-defendants in 2004. The six surrendered with Croatia under pressure to comply with the court in return for joining the European Union.

The ICTY closes its doors on December 31, having indicted and dealt with 161 people.