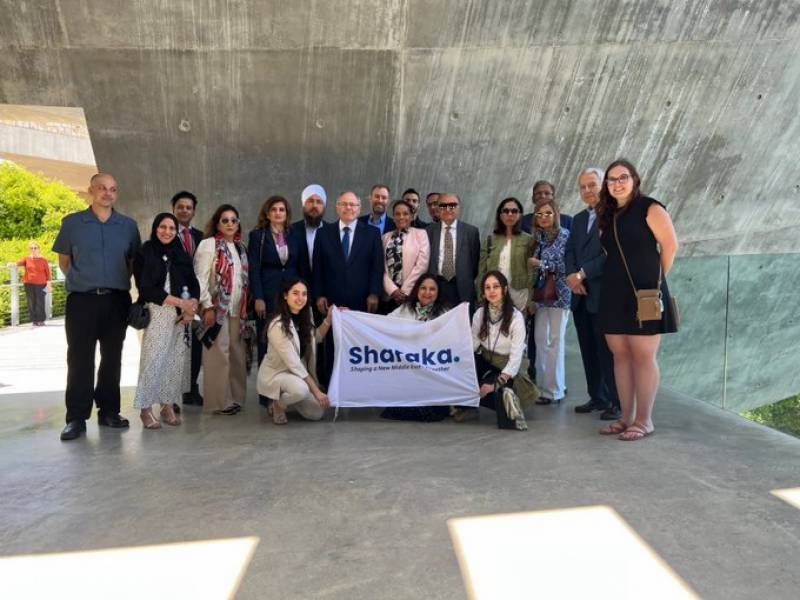 An alleged visit of Pakistanis to Israel on the Green Passport has created great controversy in the country as the political and the religious parties term such act against the ideology of Pakistan.

Though the Pakistani link government and Foreign Office have categorically rejected this thing in an official statement issued here on Sunday but the controversy is still going on in different segments of the society.

Mostly the people on social media are busy sharing a picture of the allegedly visiting people of Pakistan to Israel with some exaggerations as well as rough and tough comments that are far from the base of this.

*NGO Behind Event in Israel and Pakistani link Participants *

Most prominent Israeli link newspaper link has disclosed a complete report, with some pictures of the Pakistani link delegation with its purposes and the identity of the non-governmental organizations (NGOs) who conducted an event in Israel, published on May 25, 2022.

And, this trip was organized by the American Muslim and Multifaith Women's Empowerment Council and by Sharaka, an NGO founded in the wake of the Abraham Accords to embed people-to-people normalization between Israel and Muslim-majority states.

This trip clearly signals a change in attitudes about Israel and Jews within the Pakistani link state.

Qureshi, who works for Pakistan’s state broadcaster, Pakistan Television (PTV), is considered an expert on the Middle East and holds an excellent reputation within powerful civilian and military quarters in Pakistan, reflected in the fact that the previous government appointed him to host a show on PTV and he was one of the commentators in Pakistan Day’s military parade on 23rd March 2022.

The reporter of the newspaper link claimed that Pakistani link journalist Ahmed Qureshi told him, "All Israelis we met went the extra mile to show us that they have nothing against Muslims, that they respect Muslims, they respect Palestinian Muslims, they respect Muslims from other countries in the world, they would like to make the experience of local Palestinians and visitors from outside who want to visit [Jerusalem’s] Masjid al-Aqsa and the Dome of the Rock and other holy sites as smooth as possible."

Qureshi also noted how the Chief Rabbis of Israel have consistently forbidden Jews to enter the Haram al-Sharif, which surrounds Masjid al-Aqsa and the Dome of the Rock, known to Jews as the Temple Mount, a position reiterated by prominent rabbis since the Abraham Accords were signed.

Such testimonials by a Muslim journalist regarding Israeli link hospitality greatly influence the perception of Israel within Pakistan, since the number of Pakistanis who have ever had an interaction with any Israeli link or any Jew is infinitesimally small.

Anila Ali, who is the founder of the American Muslim and Multifaith Women Empowerment Council and was leading the delegation, told the newspaper’s scriber that both Islamophobia and antisemitism needed to be combated, and Muslims could learn from Jews how to change hateful attitudes. The delegation also made a visit to Yad Vashem, Israel’s national Holocaust memorial center, to show solidarity with its victims.

The visit to Yad Vashem is significant because a large number of people in Pakistan engage in Holocaust denial and/or downplay the unimaginable atrocities which took place.

She told him about her group’s meeting with Israeli link President Isaac Herzog. "At the beginning, I thought the president would only give us five minutes, but instead he chose to have a long conversation with us, I presented my father’s book on [the "Father of Pakistan," Mohammed Ali] Jinnah and the president said that he would find time to read it," Anila Ali told me.

Anila also stated that the Israeli link said that Israel would be open to diplomatic ties with all Muslim countries. Such trips featuring interactions between Pakistanis and Israelis are extremely rare, but not entirely unprecedented.

She also mentioned that Fiverr, an Israeli link company, boasted thousands of Pakistani link freelancers who were making billions of rupees every year via the Israeli link platform, suggesting that increased cooperation between the two countries could be mutually beneficial.

Even in the realm of sports, we have witnessed the first flowering of Pakistani link and Israeli link cooperation and partnership. In 2002, Pakistani link Tennis star Aisam ul Haq teamed up with Israeli link player Amir Hadad during the Wimbledon and U.S. Open tournaments.

Indeed, people-to-people connections between Pakistanis and Israelis have existed for a long time, with or without official sanction or backing, and no amount of overheated political rhetoric can roll that back.

Few in Pakistan remember that there was once a thriving Jewish community of thousands, centered around Karachi, Lahore, Peshawar and Quetta. Jews who left Pakistan still harbor nostalgia for their erstwhile home. Emmanuel Matat, a Jew born in Karachi who left Pakistan around three decades ago for Israel, recalls how he misses Pakistan’s signature biryani dish – and hopes to make a return visit.

Pakistan and Israel have participated in joint military exercises at various times. Pakistan’s military establishment, which is considered to be the dominant player in Pakistan’s foreign relations, is itself opening up to the idea of ties with Israel.

However, senior current and former government officials are wary of a public debate surrounding the contention that it is the powerful military which is pushing for ties with Israel.

The Israeli link newspaper link report said Pakistan’s former Human Rights Minister, Shireen Mazari, has conducted an intense campaign on Twitter slamming Qureshi’s participation in the trip to Israel, suggesting that the Pakistani link military endorsed the visit, and accusing Pakistan’s recently installed government of pushing for ties, in contrast, she claims, to the solid opposition to such normalization voiced by former Prime Minister Imran Khan.

These noisy accusations may be an attempt to deflect the conversation away from credible reports that not only did an Israeli link business plane make a short trip to Islamabad in 2018, during Khan’s tenure as premier, and that last year, a senior Khan administration official travelled to Israel for talks with senior Israeli link leaders.

According to a report in Israel Hayom, Zulfi Bukhari, a close aide of then Prime Minister Imran Khan, traveled to Israel on his British passport to meet then-Mossad chief Yossi Cohen.

Whilst Bukhari denied the reports, other, credible sources insisted that he had delivered a message from Pakistan to Israel.

In order to circumvent Khan’s government’s attempts to engage with Israel, his party’s leaders and propagandists are blaming the military establishment for calling for ties with Israel. Qureshi is adamant that Imran Khan was ready to establish relations with Israel and used his family relations as a conduit, a reference to Imran’s Khan’s ex-wife Jemima Goldsmith’s family.

Both Ben and Zac Goldsmith have openly come out in support of Imran Khan since his ouster, which led to the British government distancing itself from what it called their interference in Pakistani link politics.

As far as Pakistan is concerned, Army Chief General Qamar Javed Bajwa has declared a shift in Pakistan’s foreign policy from geopolitics to geoeconomics. That suggests that Pakistan’s geopolitical differences with Israel could be sacrificed in favor of the economic benefits which may be achieved from formal ties with Israel in industries such as agriculture, tech, cybersecurity and the freelancing market.

The fact that a Pakistani link journalist working for the state broadcaster could make this trip reflects that the Pakistani link is increasingly open to normalization. It raises the intriguing possibility of a future reciprocal delegation of Israelis visiting Pakistan, the Israeli link newspaper’s report said.