Important decisions taken in meeting of the ECC of the cabinet
29 Jul, 2022 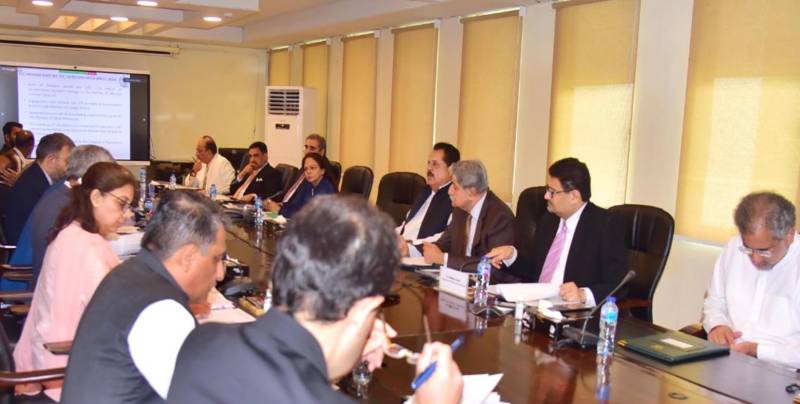 ISLAMABAD - The Economic Coordination Committee (ECC) of the Cabinet on Thursday approved the proposal to fix dealers margin at Rs. 7.00/liter for Motor Spirit (MS) and High Speed Diesel (HSD).

Federal Minister for Finance and Revenue Mr. Miftah Ismail presided over the meeting of the Economic Coordination Committee (ECC) of the Cabinet at Finance Division today.

The Petroleum Division submitted a summary on revision of OMCs and dealers margins on petroleum products, said a press release issued here.

It was informed that the existing margins were fixed in December , 2021 and Pakistan Petroleum Dealers Association has approached the government for immediate revision of their margins due to inflation, increase in tariff salaries and utility bills, etc, said press release issued here.

It was informed that Trading Corporation of Pakistan (TCP) issued 4th tender on 19-05-2022 for securing quantity of 200,000 MT of imported wheat on CFR basis.

The tender was opened on 25-07-2022 wherein six (06) international suppliers participated, out of which 05 offered rates. The ECC after detailed discussion approved the lowest bid offered by M/s Falconbridge FZ LLC@ US$ 407.49/MT CFR bulk on sight LC basis with direction to TCP to negotiate with the Russian authorities to procure wheat on lower rate subject to confirmation of the ECC.

Ministry of Water Resources submitted a summary on compensation package for the Chinese causalities at Dasu Hydro Power project.

The ECC decided that the amount of compensation/ good will package will remain the same as per ECC’s earlier decision dated January 21,2022 ( i.e US$ 11.6 million) and approved disbursement of the compensation/goodwill amount directly to the company M/s China Gezhouba Group International Engineering Co. Ltd (CGGC) through Ministry of Foreign Affairs.

The Ministry of Industries and Production submitted a summary on issues faced by Fatima Fertilizer ( Sheikhupura Plant) and Agritech.

Both the SNGPL based plants are operated by provisioning of RLNG on cost sharing basis. Gas rate for operation of these plants is worked out on the basis of Variable Contribution Margin (VCM).

Due to price increase in fuel prices and other factors, both plants have approached M/o I&P for revision of VCM and capping of GST at the price paid by the plants.

The ECC after discussion approved the proposal to ensure compliance with the earlier decision of the ECC and the Federal Cabinet of shifting both the plants to indigenous gas.

The ECC further directed Ministries of Petroleum, Finance, National Food Security and Industries & production to work out the gas price/VCM for the Fertilizers. The ECC also decided that Sales tax may be charged on the actual price of the gas being paid by the company.

Ministry of Commerce submitted a summary on prohibition/complete quantitative restrictions on import of non-essential and luxury items. It was submitted that in order to curtail the rising current account deficit (CAD), ban on the import of about 33 classes/categories of goods was imposed with the approval of the Cabinet. Due to the decision, the overall imports of the banned items have shrunk by over 69% i-e from $ 399.4 million to $ 123.9 million.

A review meeting was also held to review the ban after two months owing to serious concerns raised by major trading partners on the imposition of ban and considering the fact that the ban has impacted supply chains and domestic retail industry.

In the light of fact that imports substantially reduced due to consistent efforts of the Government, the ECC decided to lift the ban on imported goods except for Auto CBU, Mobile CBU and Home Appliances CBU.

Further all held up consignments (except items which still remain in banned category) which arrived at the ports after 1st July, 2022 may be cleared subject to payment of 25% surcharge.