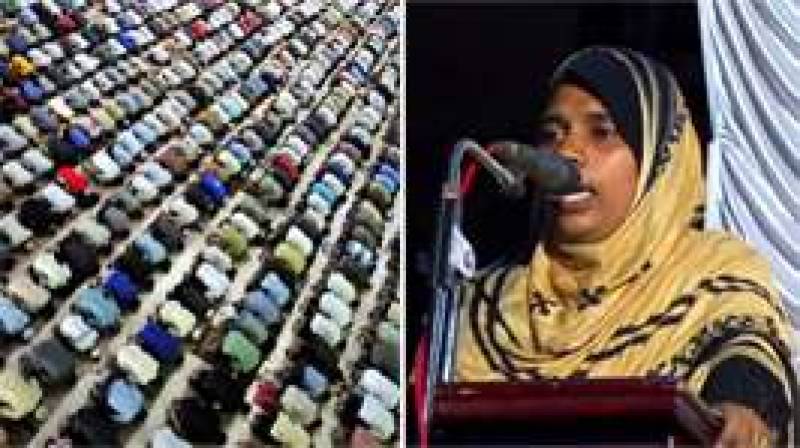 NEW DELHI - A 34-year-old woman has led Jummah, a Friday prayer service of Muslims, in Mallapuram,Kerala. This has been claimed to be the first in the history of the country.

She is Jamitha, the general secretary of Quran Sunnat Society. She took the role of the 'imam' of the prayers held at the office of the Society in the Muslim-dominated district yesterday.

Jummah, the congregational prayer held every Friday, is usually led by men.

Around 80 people, including women, gathered to attend the prayers, led by the woman 'Imam', the Society sources said.

Jamitha, known as 'Jamitha teacher' among her fellow people, said the Holy Quran never discriminates between men and women and Islam never stops women from being 'imams'.

"It is for the first time that a woman is leading Jummah in the history of our country. It was held at the central committee office of our Society, where we used to gather every Friday for the prayers," she told PTI. She also mentioned that was not mandatory for the Jummah to be held only at mosques, she said.

Jamitha says she will continue to lead prayers on Friday. Representational image.'Jummah namaz is not binding on women, but if they choose to do so, it is not a violation of the Sharia law.'Photo courtesy Pinterest.

The radical move has kicked up a wide debate for and against the practise of a woman leading Jumu'ah, on the social media.

Fundamentalists have been targeting Jamidha, harassing and threatening her over the phone as well as on social media for “going against Islam”. However, Jamidha is fearless.

“I have been receiving a number of threats through YouTube and Facebook since yesterday. I am not bothered nor am I going to buckle under pressure. If they want, let them kill me,” Jamidha stated.

Maulana Khalid Nadwi, a professor at the Nadwa Seminary told *Times Now* that Jummah namaz is not binding on women, but if they choose to do so, it is not a violation of the Sharia law.