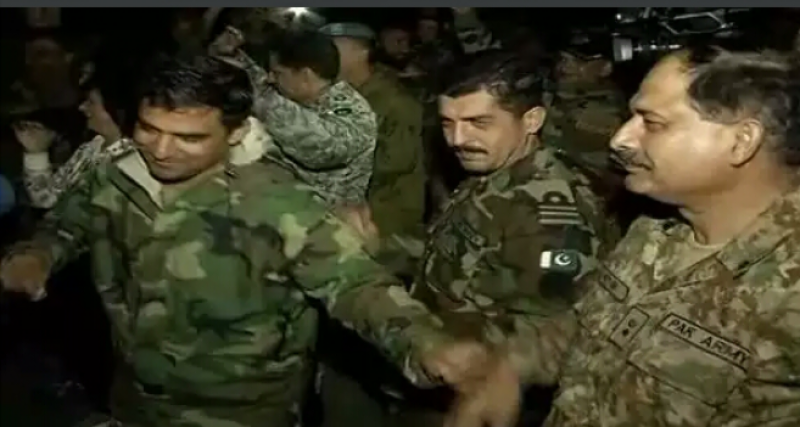 CHEBARKUL – Pakistani and Indian soldiers displayed a rare sight when they danced together on the sidelines of the military drills currently being conducted in Russia.

Clad in uniforms, the troops tried to overpower each other not in terms of military might but in terms of who shakes the legs better in tandem with the feet-tapping songs.

The rare sight was observed Tuesday night as it was marked as “Bharatiya Diwas” during the Shanghai Cooperation Organisation drills. India and Pakistan are participating in the drill for the first time since becoming full members of the SCO in June 2017.

As per the Indian tradition, the Chinese and Pakistani commanders were welcomed with a ‘tilak’ and ‘arti’. The commanders were also made to wear turbans. After this, the Indian soldiers presented a cultural performance, Indian media reported.

Apart from Punjabi tracks, popular songs of dancer Sapna Chaudhary were also played at the ceremony that went almost unreported in Pakistan.

On the occasion, Indian contingent commander Brigadier Vikas Lakhera said that India wants friendly terms with all the countries participating in the exercise which includes China, Pakistan and Russia among others.

A day earlier both played a volleyball match as well, with India emerging victorious, though it was just a match, not a war.

In the anti-terror exercise of the Beijing based Shanghai Cooperation Organisation, eight countries have participated in the mock drill being held from August 22 to August 29.