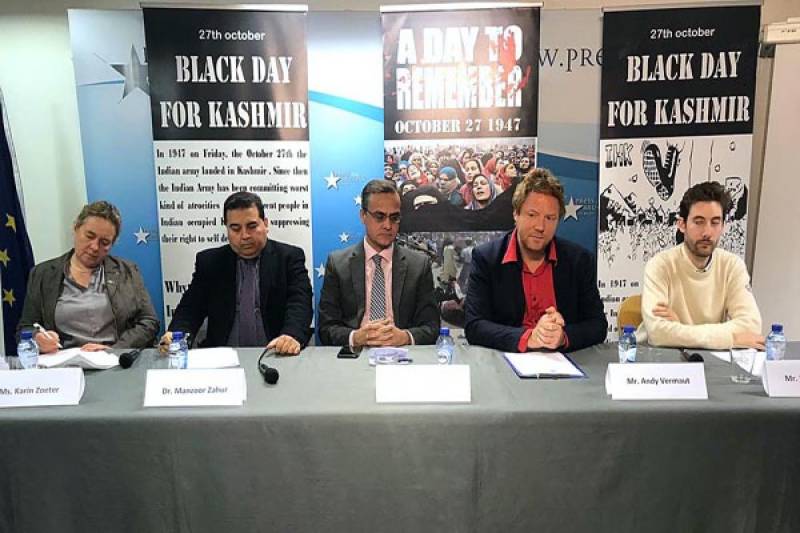 Members of the European and Belgium Parliament and community leaders have demanded an independent international investigation into the gross human rights violations in the Indian occupied Kashmir as recommended by the United Nation’s Office of High Commissioner on Human Rights (UNOHCHR) in its report this year.

They were addressing a conference organized by the Embassy of Pakistan in Brussels at the Press Club Brussels Europe to observe Black Day for Kashmir with a view to draw attention of international community to the human rights violations in the Indian occupied Kashmir, a message received here Saturday said.

Video messages of members of European Parliament including those of Members of European Parliament Jean Lambert, Julie Ward, Amjad Bashir, Wajid Khan and Mishaal Malik wife of detained Kashmiri leader Yasin Malik were also present on the occasion.In their messages, they called upon the international community to take action for addressing growing violence by the Indian forces in IoK.

The speakers were of the view that for the international community there was almost no accessibility to the Indian occupied Kashmir and India’s refusal for access to representatives of the UN High Commissioner for Human Rights to investigate violations of human rights posed a big problem.

The speakers condemned the use of pellet guns by Indian forces which had blinded thousands and killed hundreds of Kashmiris since the uprisings in the aftermath of martyrdom of young Kashmiri leader Burhan Wani in July 2016.

They referred to the report of UN’s Office of the High Commissioner for Human Rights that over 1,000 people were detained under the PSA in just one year between March 2016 and August 2017.

Human rights groups had warned Jammu and Kashmir authorities that minors were being arrested under the PSA. Medical aid was also being obstructed in Indian Occupied Kashmir making situation even worst for innocent people of Kashmir, they added.