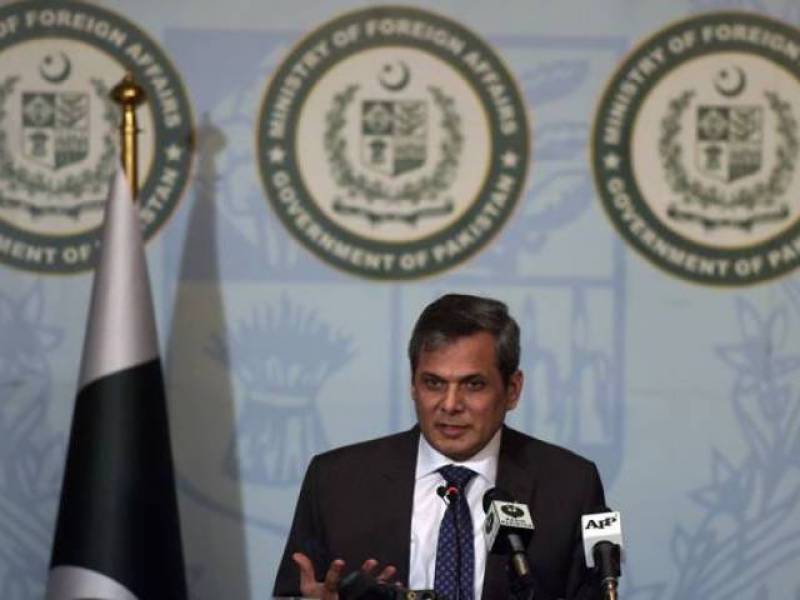 ISLAMABAD: Foreign office spokesperson in response to a question said, Pakistan has long maintained that India's rapidly expanding military nuclear programme posed a grave threat to peace and stability in the region and beyond.

"These concerns have been fully validated by publicly available reports on significant upcoming fissile material facilities and build up of unsafeguarded weapon usable fissile material in India," he added.

Nafees Zakaria said, "This buildup has been facilitated by the 2008 NSG (Nuclear Suppliers Group) waiver granted to India, which not only dented the credibility of the non-proliferation regime and undermined its efficacy, but also negatively affected the strategic balance in South Asia."

It was unfortunate that the NSG did not require India to make any worthwhile non-proliferation commitments at the time, he added.

He said, another country-specific exemption by the NSG on the membership question would only further exacerbate the ill effects of the 2008 exemption.

"It remains our hope that the NSG member states would make a well-considered decision this time keeping in view its long-term implications for the global non-proliferation regime as well as strategic stability in our region," he added.

To another question, the spokesperson said, "In the past too, Indian politicians have cast aspersions on Pakistan and have used this as a tool in domestic politics of India. We see the current political debate about Pakistan in India, in the same backdrop as also its desperation to deflect the world attention from its atrocities in IOK."

"The timing and pattern of heating up LOC (Line of Control) and WB (Working Boundary) by India are suggestive.

Pakistan condemns such crass attempts to malign it," he remarked.

To another question, the spokesperson said, the Indian involvement in terrorism inside Pakistan was well proven beyond doubt; and "we have irrefutable evidence of that."

"We have also shared with you many times that the investigations after the arrest of Kulbushan Yadav is ongoing and the dossier is being compiled. As soon as the time is propitious, we will submit the dossier to the concerned, particularly the UN Secretary General," he added.

About Indian allegations of espionage against Pakistani official, he said, "It is on record that our official was mistreated against the diplomatic norms.

He was kept under detention in contravention of the Vienna Convention. We have protested against this with the Indian side."

India has been seen taking a number of desperate steps primarily to deflect the attention of the international community from its atrocities in IoK, he said, adding, "We need to see India's actions in this backdrop."

"India has had a track record of creating situation on its own soil to deflect attention and to achieve certain objectives. India is trying to portray that the uprising in IoK is not an indigenous movement of self-determination but an act of terrorism, which of course the world has already rejected," he added.

In response to a question, the spokesperson said, Pakistan has taken and will continue to take decisive action against all terrorists and militant groups.

"We are fully committed to the principle that our soil would not be allowed to be used against other countries. Our National Action Plan is being successfully implemented," he added.

Nafeez Zakaria, however, added, "it is important to emphasize here that we are being threatened by the foreign sponsored terrorism like the recent terrorist incident in Quetta against police cadets."

About Pakistan's acceptance to attend the Heart of Asia Conference to be held in India, he said, the Conference was aimed at bringing development in Afghanistan with the collaboration of other regional countries.

"It is in line with Pakistan's commitment of supporting all efforts towards peace and stability in Afghanistan that we will be attending the conference," he added.

The spokesperson said, Pakistan has always supported efforts to ensure peace and prosperity in the region and will continue to do so.

Pakistan Foreign Office replies to the letter of the Indian FM

"We will play our role and will not let this regional forum fall prey to the myopic political agenda of any country.

However, the decision on the level and manner of participation in the Heart of Asia Conference is yet to be taken," he added.

To another question, Nafees Zakaria said, "Pakistan strongly condemns the continued unprovoked ceasefire violations from the Indian side on the LoC and the Working Boundary, resulting in the loss of innocent lives and injuries."

"We have called upon the Indian government to respect the 2003 Ceasefire Understanding in letter and spirit and refrain from targeting civilians and their properties. The ceasefire violations from the Indian side is an effort to divert international attention from grave human rights violations and genocide in the Indian occupied Jammu and Kashmir being committed by the Indian occupation forces," he added.

The spokesperson said, "The Indian Government must stop bloodshed of innocent Kashmiris, must stop torturing Hurriyat Leaders, must not create food crisis and deny other basic amenities to the Kashmiris, which it is doing to break their peaceful movement for their right to self-determination."

"India must respect the UN Charter, fulfill its obligations under International human rights and humanitarian laws and implement UN Security Council resolutions on Jammu and Kashmir as well," he added.