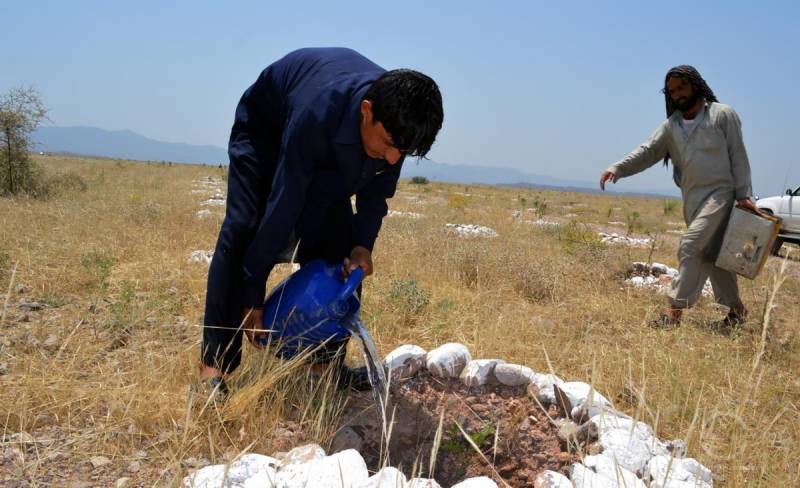 PESHAWAR (APP): The Environment and Forest Department Khyber Pakthunkhwa under its Billion Tree Afforestration project (BTAP) would complete its first manmade forest at Gari Chandan near Peshawar by March next to counterbalance the growing effects of climate change, environmental pollution and global warming in the region.

National Forest University to be established in KPK: Imran Khan

Chief Conservation of Forest, Sadeeq Khattak said this while briefing journalists during visit to Ghari Chandan Forest being raised about 10 kilometers South of Peshawar under BTAP.

Sadeeq said work on this forest was in full swing that would be completed by March next year, adding so far one million saplings of different species have been planted on 2000 acres of land. "Practical afforestration was started in December 2014 following a three years agreement with local community as we are moving fast to complete the said target within stipulated time."

"Despite the challenges of shortage of water tankers, sudden eruption of fire, rain shortfall and livestock grazing, tree plantation of various species like Palosa, eucalyptus, pine and kikker continued with cooperation of local communities."

Clarifying a report of Private TV Channel about drying of trees at the forest, the CCF said survival rate of planted sapling is about 90 percent and two tankers were hired for watering of trees and rejected the impression that saplings are dying due to lack of watering. "Our doors are open for everyone. Any person including media wanted to see the plantation on ground would be facilitated," Khattak maintained. He requested media to confirm reports from concerned Forest Officials before releasing and publishing it as wrong reporting can affect the confidence of the staff viz a viz investors.

Shafqat Munir, Conservator Forests South Circle told journalists that Rs 28 million have been spent on raising of this forest so far against estimated expenditure cost of Rs50 million by saving Rs22 million to the Govt kitty. He said monitoring of the project was done by Government as well as private reputed agencies/organizations on regular basis with financial transparency were its hallmark.

"BTAP was recognized at Boon Challenge, Paris Conference 2015 and Cop 21 conference that was a great achievement for the country viz a viz Khyber Pakthunkhwa." After expiry of three years agreement, he said, this forest would be handed over to the land owners/right holders for looking after under supervision of forest department.

Munir said climate change was a big challenge to the region that could be effectively counter through collective efforts with maximum raising of maximum forests. "Forests not only provide solutions for addressing many development challenges including poverty eradication, environmental sustainability, food security and clean water, biodiversity conservation, controlling floods and disaster risk reduction but these were also vital for creating green economies and mitigation effects of climate change."

To achieve these objectives, BTAP project was launched to improve ecosystem of classified forests, as well as privately owned waste and farm lands, the project therefore entail working in close collaboration with concerned communities/stakeholders to ensure their meaningful participation through effectuating project promotion and extension services.

Later, the journalists visit around the Gari Chandan forest and were briefed about the old and young plantations.