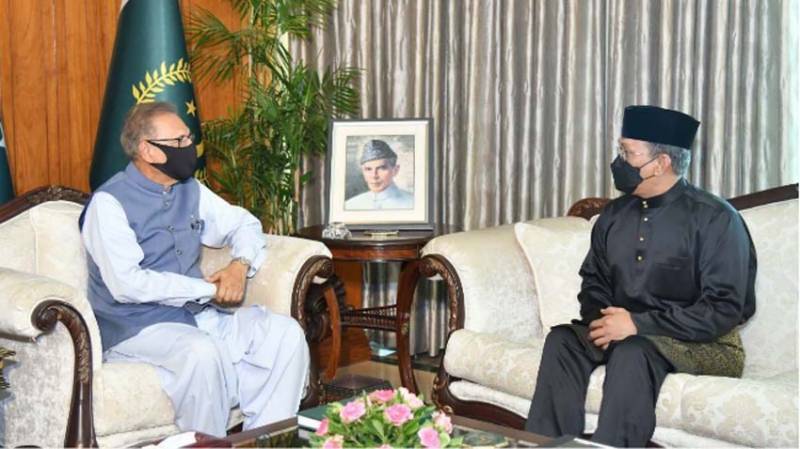 President Dr Arif Alvi has underscored the need for increasing cooperation with Malaysia in the areas of trade, culture and technology for the mutual benefits of the two brotherly countries.

He made these remarks while talking to the outgoing High Commissioner of Malaysia to Pakistan Ikram Bin Mohammad Ibrahim, who called on him, at Aiwan-e-Sadr, today (Thursday).

The President said Pakistan attaches significant importance to its ties with Malaysia as the two countries enjoy excellent relations in various fields and unanimity of views on regional and international issues.

Talking to the High Commissioner, the President said that there existed tremendous amounts of goodwill between the two countries and bilateral cooperation needed to be further expanded for the mutual advantages of the two sides.

He stated that Pakistan offered tremendous investment opportunities and Malaysia needed to take advantage of the investment friendly environment.

The President also highlighted the brutalities being committed by the Indian Security Forces against the people of Illegally Indian Occupied Jammu and Kashmir and Israeli military forces against the Muslims of Palestine.

He urged the international community to fulfil its obligations by granting inalienable right to self-determination to the people of IIOJ&K and Palestine.

The President thanked the Government of Malaysia for supporting Pakistan's position on Kashmir. He appreciated the contribution made by the High Commissioner towards strengthening bilateral ties between Pakistan and Malaysia.