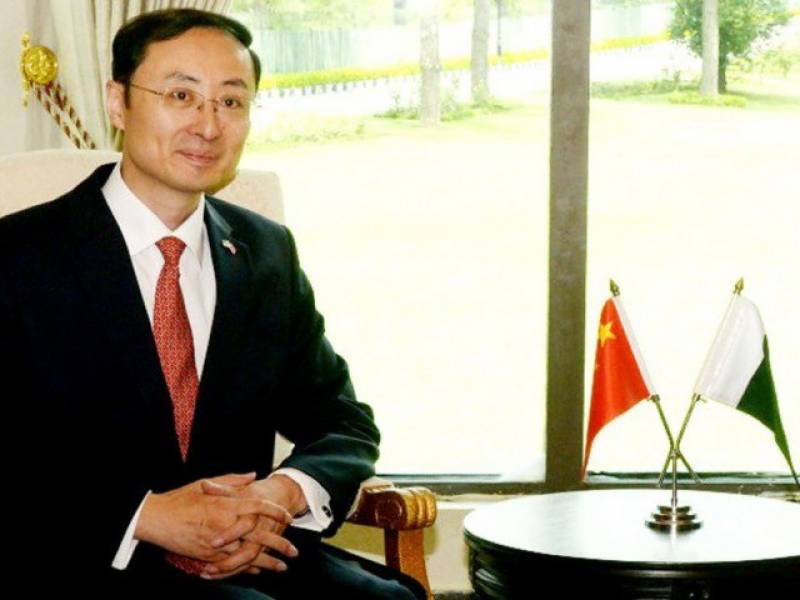 After last year's visit of Chinese President, Xi Jinping to Pakistan, there was a smooth implementation of projects under the CPEC framework.

Energy, infrastructure, Gawadar port and industrial cooperation were important components of CPEC which were being implemented smoothly and within a few years, there would be more achievements in this regard, he said in a joint interview with APP, PTV and PBC in connection with 65th anniversary of the establishment of Pak-China diplomatic relations.

He said the solar, coal and hydro power plants, being set up under the CPEC, a gigantic milestone in the history of Pak-China relations, would help a lot to meet energy shortage in Pakistan. About progress on infrastructure projects, he said upgradation of KKH II (Thakot to Havelian section) and construction of Lahore-Karachi motorway (Multan to Sukkur section) were being carried out.

He informed that fiber optic was being laid from Khunjarab to Rawalpindi in order to provide best telecommunication facilities between the two brotherly countries.

After handing over of Gawadar seaport to China, the Ambassador said that a lot of activities had been accelerated in the area including an international airport and expressway to benefit people from the trade and transportation facilities.

Sun Weidong said that through industrial cooperation, China and Pakistan could enhance their economic growth as well exports from their respective countries.

Replying to a question, the Ambassador said that currently the bilateral trade between the two countries was around US$ 18.9 billion, adding with the development of CPEC framework, China had become the largest investor for Pakistan.

China had been encouraging its companies to invest in Pakistan as country offers huge investment opportunities, especially after the signing of CPEC with Pakistan.

Through their mutual cooperation in the industrial sector, both the countries would be able to export their products to other countries, he added.

The Ambassador said, "Our cooperation is not limited to economic ties but it encompasses people-to-people contact, cultural exchanges, health and education."

He informed that China Cultural Center had been set up at Pakistan National Council of the Arts (PNCA), Islamabad to promote cultural activities between the two countries.

"We have established Confucius Institutes in Islamabad, Karachi and Faisalabad and similar institutes would also be set up in other cities to enable Pakistani people to learn more about Chinese language," he remarked.

Chinese Ambassador to Pakistan Sun Weidong said that both China and Pakistan wanted peace and stability in the region and are active in world's bodies including United Nations, Shanghai Cooperation Organization (SCO) and ASEM, etc.

Both the countries had unanimity of views on all major regional and international issues, he added.

The Ambassador said that terrorism and extremism were common enemies of China and Pakistan and both of them had been making efforts for peace and stability in the region.

He said that dialogue provided the best solutions to any problem. China and Pakistan were extending support to peace process in Afghanistan, as an 'Afghan-led, Afghan-owned' peaceful solution was in the common interest of regional countries.

To a question, he said, military cooperation of both countries was fruitful with fresh progress.

"We extend our high appreciation to sacrifices made by Pakistan in the fight against terrorism," he remarked.

He said the international community should recognize and extend its support to Pakistan in its fight against menace of terrorism.

The Chinese Ambassador said that China had been facing terrorism and sought close cooperation from Pakistan to fight terrorism.

Highlighting the economic progress of China, he said, last year his country achieved a GDP growth rate of 6.9 percent and it remained at 6.7 percent of the first quarter of this year.

China, he said, was one of the fastest growing economies and second largest economy of the world.

He said China and Pakistan were developing nations, adding, "We should develop our economies on sustainable basis imperative for peace and stability."

He stressed the need for keeping momentum of sustainable economic growth also beneficial for the world.

Highlighting the warm and cordial relations between the two countries during the past 65 years, he expressed the confidence that this cooperation would continue to grow even stronger, so as to help build up a community of shared destiny.

Extending heartiest felicitations to the Pakistani nation on the occasion of 65th anniversary of Pak-China diplomatic relations, he said, "We describe China-Pakistan as iron brothers and call it all-weather strategic cooperative partnership while the Pakistani brothers term it as higher than mountains, deeper than sea and sweeter than honey."

Both the countries had stood test of time and worked together shoulder to shoulder during natural calamities including earthquakes and floods.

He said this relationship was going stronger to stronger besides transferring it from generations to generations.

"Our friendship is based on principles of mutual respect, mutual understanding and mutual trust, and non-interference into each other domestic affairs, which provides a solid base of friendship among the people of two countries."