Pakistan has no favourites in Afghanistan, COAS Bajwa tells US official
28 Aug, 2021 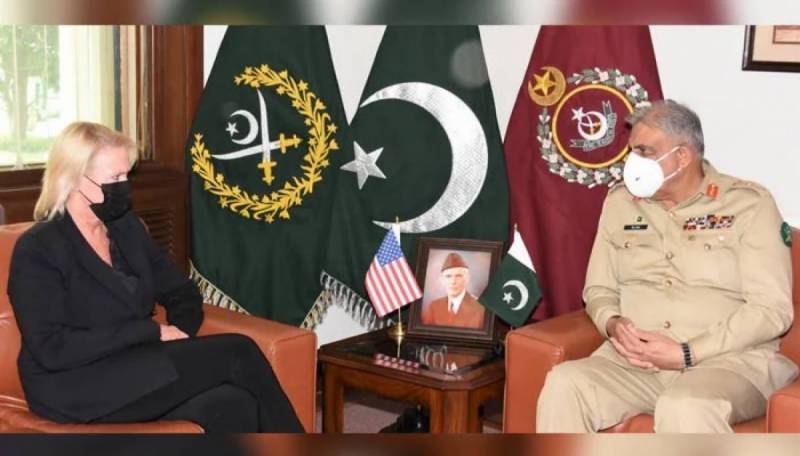 Pakistan’s Chief of Army Staff General Qamar Javed Bajwa reiterated on Friday that Islamabad had no favourites in Afghanistan.

He was talking to US chargé d'affaires Angela Ageler at the General Headquarters of the Pakistan Army in Rawalpindi a day after bomb explosions rocked the Kabul airport, leaving dozens dead, including US troops.

According to the Inter-Services Public Relations (ISPR), matters of mutual interest, regional security and the evolving situation in Afghanistan were discussed in detail during the meeting.

The army chief told the US ambassador, "Pakistan has no favourites in Afghanistan and our sole aim is helping achieve peaceful, sovereign, stable, and prosperous Afghanistan.”

Condemning the terrorist attacks at Kabul airport and expressing sorrow over the loss of precious lives, he reiterated the combined resolve to fight terrorism and extremism to the core.

The US diplomat praised Pakistan's efforts in promoting regional peace and stability and thanked the army chief for the special assistance in the evacuation operations from Kabul, the military's media wing added.

Earlier, ISPR Director-General Major General Babar Iftikhar addressed an important press briefing on the Afghanistan issue, saying "something can happen" at the Pakistan-Afghanistan border but "we are ready" for all sorts of situations.

Speaking about the situation along the Pakistan-Afghanistan border from a military perspective, he said that the situation on the ground in Afghanistan changed rapidly — against all expectations, in reference to the swift takeover of the country by Taliban forces, which culminated in the group entering Kabul on August 15.

In Afghanistan, US forces trying to evacuate Afghans desperate to flee the new Taliban rule were on alert for more attacks on Friday after the Daesh attack just outside the Kabul airport.

The Pentagon said on Friday the attack was carried out by one suicide bomber, not two as earlier thought.

US President Joe Biden is facing strong criticism at home and abroad for the chaos surrounding the troop withdrawal that led to the Taliban's lightning advance to Kabul.