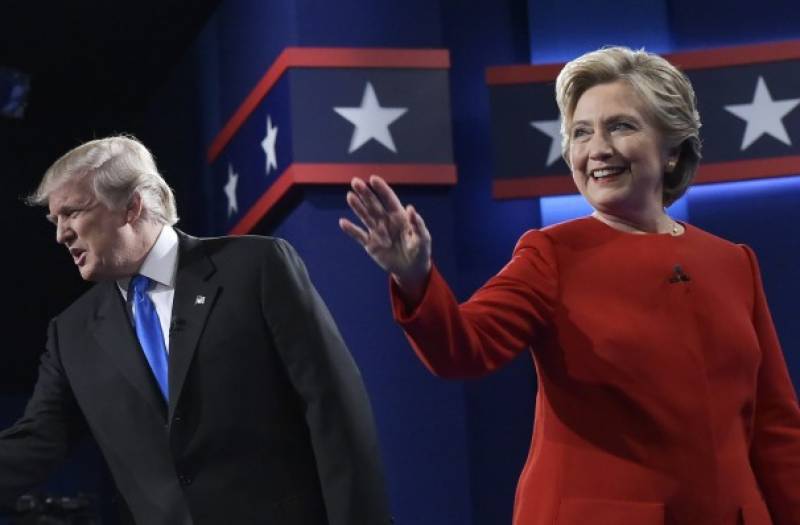 WASHINGTON (APP) - Hillary Clinton touted her foreign policy experience during Monday's presidential debate as proof she's fit to be the next commander in chief, but rival Donald Trump argued that the ex-secretary of state left the Middle East in flames.

As the two White House hopefuls sparred on several foreign policy fronts including Russia, Iran and fighting Islamic State jihadists, Clinton sought to allay the worries some global leaders have about the populist businessman making a run for the White House.

"I want to reassure our allies in Japan and South Korea and elsewhere, that we have mutual defense treaties and we will honor them," the Democrat said as she put Trump on the defensive over nuclear proliferation, Iraq and the role of NATO.

"I want to -- on behalf of myself, and I think on behalf of a majority of the American people -- say that our word is good."

Clinton has long pointed to her extensive experience on the world stage to proclaim herself the more qualified candidate, and she hammered Trump -- a foreign policy novice -- for suggesting that Washington would re-evaluate longstanding partnerships if he were the next president.

"We have to work more closely with our allies. That's something that Donald has been very dismissive of," Clinton said.

Trump has criticized NATO members for not contributing their fair share to the organization, and he reiterated his warning again Monday night that Washington cannot be left holding the bag.

"I want to help all of our allies, but we are losing billions and billions of dollars," Trump said. "We cannot be the policeman of the world."

Trump also counterpunched against Clinton's experience claim, noting that it was the quality of work, not the stamps in a diplomat's passport, that mattered.

"Let me tell you, Hillary has experience. But it's bad, bad experience," he said.

"You look at the Middle East, it's a total mess -- under your direction, to a large extent."

Clinton and Trump have battled for more than a year over what led to the rise of the Islamic State group and how to defeat the jihadist insurgency, with the Republican asserting that Clinton and President Barack Obama "created a vacuum the way they got out of Iraq."

"You're talking about taking out ISIS. But you were there, and you were secretary of state when it was a little infant," Trump said, in one of his more powerful criticisms of the night.

Clinton argued that air strikes against jihadists have intensified, and said Washington was hoping to push IS out of Iraq "within the year."

Clinton also pressed the point that Trump's harsh rhetoric about Muslims -- last year he called for a temporary ban on Muslims entering the country -- only enflames US adversaries.

Trump "has consistently insulted Muslims abroad, Muslims at home, when we need to be cooperating with Muslim nations and with the American Muslim community."

Clinton also said it was vital to stand tough against the Kremlin, as she said there was "no doubt now" that Russia has conducted cyber attacks on US targets.

But she stated that instead of condemning Moscow, Trump has been "very praiseworthy of Vladimir Putin," the Russian president.