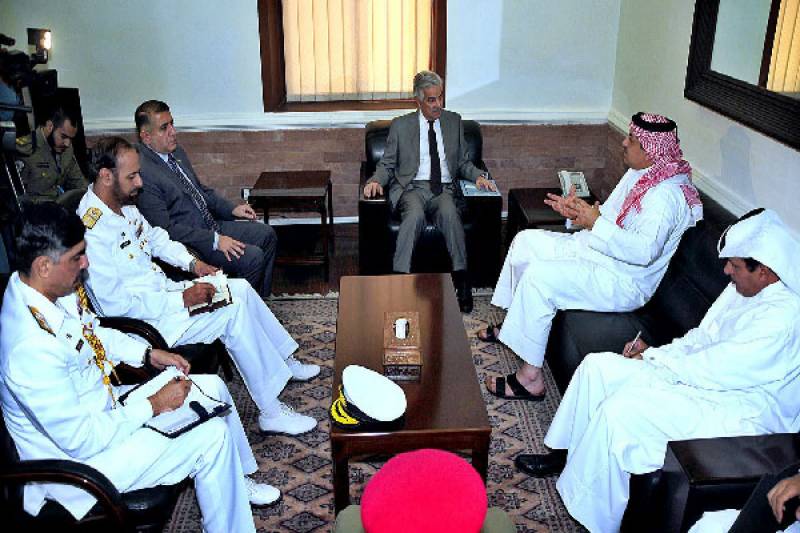 Minister for Defence Khawaja Muhammad Asif extended the offer during a meeting with Qatar's Minister of State for Defence Affairs Khalid Bin Mohammed Al Attiyah, who along with a delegation called on him.

According to a press release issued here, Khawaja Asif said Pakistan attached great value to its relations with Qatar and desired to further strengthen the existing bilateral ties on the long term basis.

He mentioned that earlier visits of the Emir of Qatar to Pakistan in March 2015, Pakistan's Prime Minister and Presidents visits to Qatar had proven fruitful to enhance the existing relations including military and defence cooperation between the two countries.

Khawaja Asif said the 'Pakistan-Qatar Staff Talks' was an established forum between the two Armed Forces and would help further strengthen the bilateral relations .

He said Pakistan was looking for an early posting of Defence Attach‚ at the Qatar Embassy Islamabad.

The visiting dignitary acknowledged the scope of cooperation between the two countries and desired to undertake joint ventures in the field of defence industry.

Khawaja Asif also extended an invitation to the Qatari Minister to attend IDEAS 2016, a defence exhibition, being held in last week of November 2016.

He thanked for agreeing to "transfer the Sea King aircraft after their disposal from QEAF to PN, and expressed the desire for the continuation of Sea King simulator training to PN."