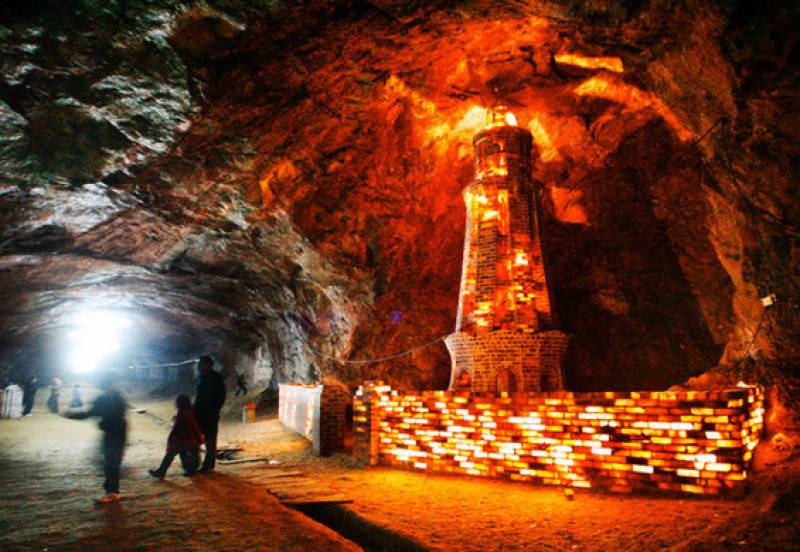 KHEWRA: (APP) Khewra is famous for having world's second largest salt mine, which is the largest by area-wise in the world.

Official sources told APP during a visit to the saltmine here on Thursday that the reserves contain rock salt in the form of halite (98 percent) and is said to be of pre-Cambrian age.

It is estimated that the mine contains more than 82 million metric tons of reserves of rock salt. It has an annual output of around 0.35 million tons of which 60 percent is sold to a soda ash manufacturing factory in Khewra.

The salt is being mined from this location for centuries. However, the British government in 1872 introduced improved mining practices.

This factory also pumps out accumulated brine from the mine while Pakistan Mineral Development Corporation (PMDC) also exports salt on order-to-order basis.

The rock salt is extracted by using pillar and room technique and the total length of tunnels is 40 km. The mine has 12 levels, out of which six are below the surface and currently 400 miners were working in the mine.

A portion of Khewra salt mine has been converted into tourist spot by the PMDC, wherein visitors have an opportunity to visit a portion of tunnel, developed in 1914 at level 06. Restaurants, parking, public health facilities, shops, etc have been constructed by the PMDC to facilitate the visitors.

More than 250,000 people visit the saltmine each year. During the last week of January 2016, the PMDC in collaboration with Tehsil Municipal Administration organised a three-day salt festival that attracted a large number of visitors and media attention.

The PMDC has also constructed a 6-bed Allergically Asthma Resort for people suffering from Allergic Asthma at level 05. Patients who need treatment spend 8-10 hours each day in the resort for 10 days. During night, the patients move to the rest house of the PMDC, located near the mine.

The PMDC owns and operates 'Institute of Surveying', the only technical institute located in the tehsil. It offers one-year certificate course in surveying. The pass-outs of this institute find good jobs in the Middle Eastern construction sector.

There are around 25-30 rock salt processing units in the tehsil that are categorised as SMEs. Entrepreneurs who have salt-mines on lease mostly own the units. The production process begins with manual separation of edible and industrial grade rock salt. Around 70 percent of salt is of industrial and 30 percent of edible grade.

At times, sorting is also made on the basis of color for edible salt, of which pink color salt fetches premium price.

The unit operations are mostly 'size reduction' and 'classification'. The salt lumps are crushed by hammer mills and ground (if required) in rotary disc mills and then classified and packed on the basis of grain size. Vibratory and rotary sieves are used for the size classification.