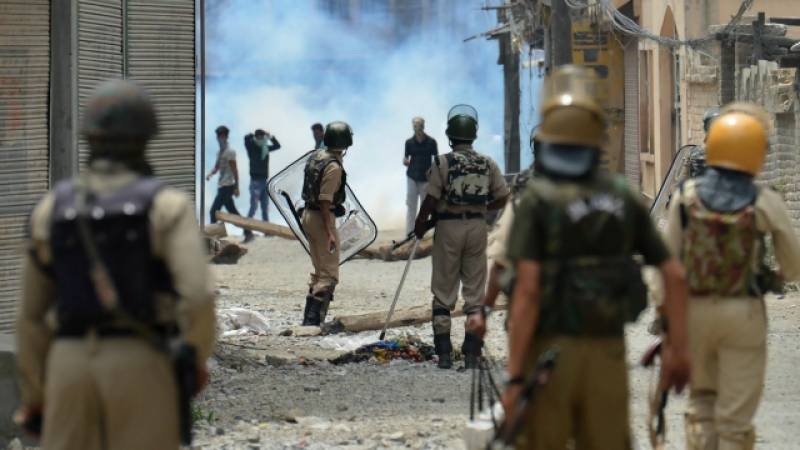 ISLAMABAD: (APP) To honor the sacrifices of the Kashmiri people who have laid down their lives for their right of self-determination and to condemn the illegal occupation of Kashmir by India, Kashmir black day was observed at the Consulate General of Pakistan, Jeddah on Thursday.

The programme included screening of a documentary film on the struggle of the Kashmiri people and the atrocities being perpetrated by the occupying forces, a message received here said.

Despite working day, a large number of Pakistani community members turned up from across Jeddah.

Speaking on the occasion, Consul General, Shehryar Akbar Khan said that a new wave of Intifada has started in occupied Kashmir following the martyrdom of Muzaffar Wani.

He highlighted the human rights violation by the Indian forces and appealed to the world community to take notice of the atrocities.

He said 150 Kashmiri youth have been blinded and 700 others have been partially blinded by the Indian forces using pallet guns.

Masood Ahmed Pori, President Kashmir Committee presented a resolution which was passed by the Committee in a meeting with Consul General a day earlier.

Saeed Sarwar, head of Chancery readout the messages of President and Prime Minister of Pakistan regarding Kashmir Black Day.

Earlier. Ghulam Nabi Butt, member Kashmir Committee, spoke to the audience and highlighted the sacrifices of the Kashmiri freedom fighters for their cause.

The function concluded with unanimous expression of support to the just cause of the Kashmiri people and prayers for the progress, solidarity and prosperity of Pakistan and success of the valiant people of Kashmir in their struggle for right to self-determination.