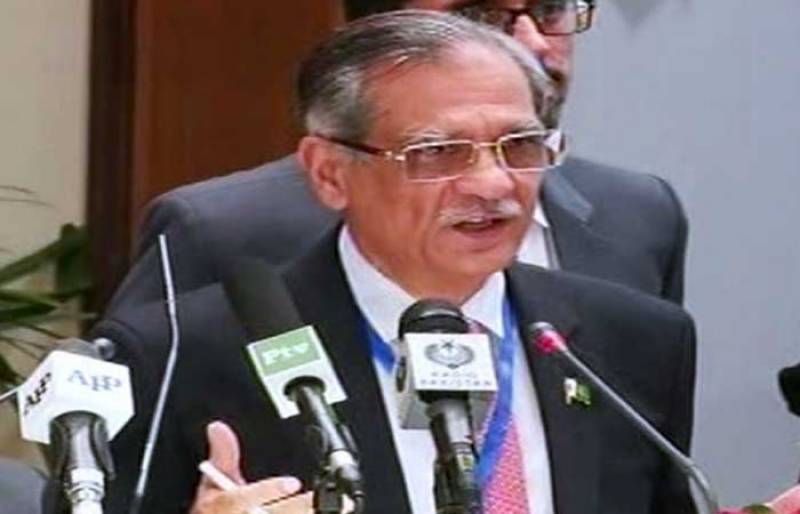 ISLAMABAD: Chief Justice of Pakistan (CJP) Mian Saqib Nisar said construction of dams in Pakistan was vital for the future generations of Pakistan.

"There is a dire need to build several dams in Pakistan to avert the looming water crisis in the country and vowed not to let anyone misappropriate the funds being collected for construction of dams to resolve the country’s water crisis".

“Pakistani Diaspora has shown utmost affection to the cause and they have been extremely generous in the campaign by donating huge sums in the fund-raising campaign which I wasn’t expecting”, he said while talking to media in London.

The Chief Justice said he never expected such an immensely positive response of the overseas Pakistani community and was grateful to them for such an overwhelming response towards the dams fund-raising events.

Regarding the ongoing campaign in Britain for fund raising for the dams, he said that failure to construct uncontroversial dams in the country was a criminal negligence.

"Construction of new dams in the country was critical for its survival as water is a hope of life for our coming generations and we have to take steps to save water from being wasted", he added.

He said the water level in Pakistan was falling sharply, which has affected daily life in all big and small cities.

He regretted that governments during the last 40 years kept ignoring the alarming issue of water crisis and did not pay any heed to need of building dams. He recalled that the last dam was built in Pakistan some 40 years back.

Justice Nisar said Rs40 billion were spent on ‘Saaf Paani scheme, but the citizens could be provided with clean drinking water.

‘It’s now high time to render sacrifice to save the next generation,” said the chief justice.

He said the dams initiative was for humanity and it related to lives of tens of millions of people.

Justice Nisar said he was thinking of forming a bench to keep a watch on the money spent from the dam fund so that it cannot be used for any other purpose.

He said Manchar Lake, which was a main source of water supply for Karachi, was now contaminated. “Similarly, all waste is being dumped in River Ravi in Lahore.”

“Ground water was around 40-feet deep in the past, but now it has reached 400-feet in Lahore and 1500-feet in Quetta, which is alarming,” the CJP said. He said construction of new dams was now inevitable in Pakistan.

Justice Saqib Nisar said, “Pakistani Diaspora has shown utmost affection to the cause and they have been extremely generous in the campaign by donating huge sums in the fund-raising campaign which I wasn’t expecting.”

He said a proper mechanism needs to be developed for usage of dam fund money a website would also be created to keep public informed about spending of their donations.

He also called upon the experts to share their expertise to how we can collect more funds for dam constructions as this fund raising campaign was not enough for this cause.

CJP said the dam fund was property of the public, “and I would ensure to leave it in secure hands before I leave.”

Justice Saqib Nisar also talked on the affair of Pind Dadan Khan and ensured that the water scarcity issues of the people of Pind Dadin Khan would be resolved soon.

To another question the CJP said, “The nation pays its hard-earned money as taxes and we cannot allow people to loot it.”

“A team has been formed under the State Bank of Pakistan (SBP) governor to bring back looted money to the country,” he said.

Stressing the need for across the board accountability, the chief justice said, “In the Supreme Court, we do not see who is on whose side and we only see the law.”