Hinduism being masqueraded as secularism in India : AJK President:
27 Jun, 2020 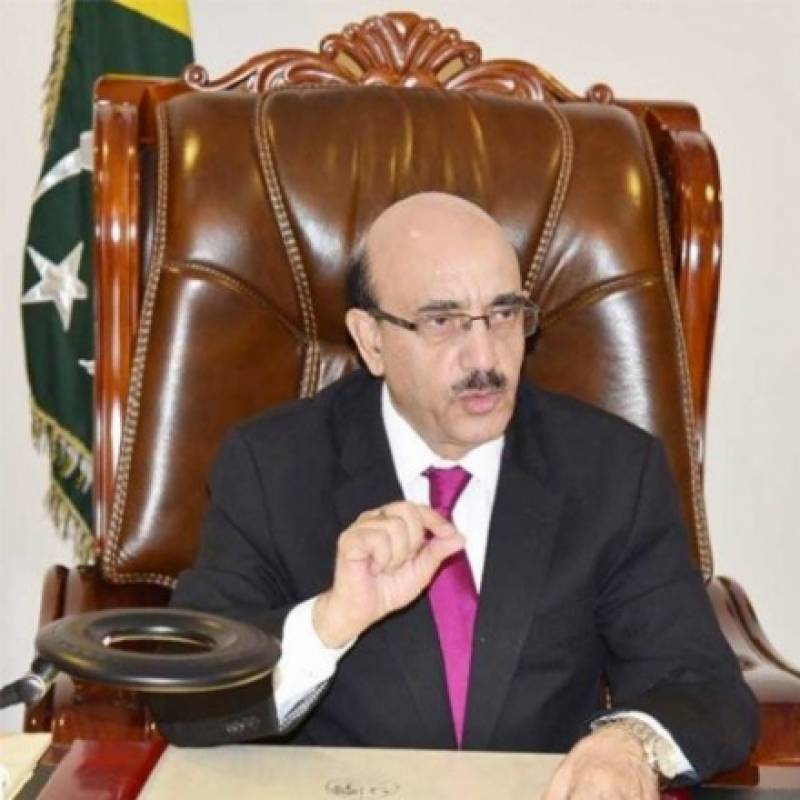 This concept, he said, was an insincere attempt as this was nothing but Hinduism mascaraed as secularism.

The president made these remarks while addressing two separate web-conferences organized by the Institute of Policy Studies on the topic of “India: Past, Present & Future: Perceptions of the Muslim World”; and by the Pakistan High Commission UK on the topic “Seeking Justice for Kashmiri Victims of Sexual Violence and Physical Torture, and Widows”, AJK Presidential secretariat told media on Saturday.

Speaking at the IPS Session – which was attended by leading international experts from the United States, Saudi Arabia, Bangladesh, Afghanistan and Nigeria – the president said Hindu fascists romanticized an imaginary state of Akhand Baharat that they claimed to have existed before the arrival of Muslim rulers in the Sub-continent. This notion, he said, was not only unsubstantiated by history, it is also counterintuitive.

Referring to the l secularism adopted by India, the AJK president said that over the decades, this glue of secularism had has come off and the real face of the India’s political masters had been exposed. Not long after Independence, on 27 October 1947 India began working on its imperialistic agenda, and invaded the Jammu and Kashmir State. Driven by its Hindu-extremist policy, India had carried on with this agenda over the years, he added.

Masood Khan said that lawmakers and the leadership of BJP, the RSS and their affiliates had publically declared that they would do away with Muslims from within India. This, he said, has caught the attention of Hindu zealots from across India which had consequently impacted the larger political landscape of India.

This BJP-RSS nexus has waged three wars in the region; one against its minorities inside its own borders, the second one against Kashmiris in the occupied territory of Kashmir and the third one against all its neighbouring countries. Considering Pakistan as enemy number one, they have threatened to wipe off Pakistan from the face of the earth by the use of nuclear weapons, he informed.

President Masood Khan said that India’s ambition of becoming a colonial and imperial power in the region had led it to using the Line of Actual Control in Ladakh for sabotaging the Belt and Road Initiative (BRI). It has also formed a four member alliance QUAD – comprising of India, USA, Japan and Australia – to oppose the BRI and, especially, the China-Pakistan Economic Corridor.

“India is the biggest barrier for progress in the region. SAARC has been struggling for decades and that too because India has been standing in the way of economic integration as it wants to establish its hegemony in South Asia”, the president added.

Speaking about the situation in IOJK, he said that India was practising the policy of lebensraum by reoccupying the State of Jammu and Kashmir, bifurcating it and now bringing it under the direct rule of Delhi. He compared the New Domicile Rules introduced in IOJK, to the policy followed by Nazi Germany against the Jews, based initially on economic strangulation, followed by demonization and marginalization and finally physical extermination.

The president apprised that in IOJK political leaders had been incarcerated, the youth were being killed and tortured in jails all over the occupied valley and northern India. He added that 13,000 Kashmiri boys had been abducted and kept in prison houses where they were being subjected to torture and brainwashing.

Bipin Rawat, India’s Chief of Defence Staff had said that these boys (some as young as 10 years old) were more dangerous than a pellet-firing shotgun because they raised the slogan of Azadi (freedom) and self-determination, he added.

The president said that members of the Organization of Islamic Cooperation (OIC) should start a boycott, divestment and sanctions movement against India, while the corporate sector of these countries should be discouraged to invest in India as they were committing human rights violations against Kashmiris and Muslims of India. Start by banning the import of non-halal meat and non-halal into OIC countries and the formation of a Kashmir Humanitarian Fund with the help of the Islamic Development Bank and Islamic Solidarity Fund. He also suggested an international civil society movement be mobilized to delegitimize Hindutva and campaign to declare RSS a terrorist organization. “The biggest and the most trained terrorist organization in the world is the RSS. They have openly declared to target Muslims not only in South Asia but all over the world”, he said.

Appreciating the supportive role of the OIC, Masood Khan appealed to the Arab League and the Gulf Cooperation Council to raise their voice against Kashmir and call out the egregious human rights violations taking place in IOJK.

Speaking at the web-conference hosted by Pakistan High Commission, the president appealed to powerful nations to make moral and legal choices for bringing India to justice and helping dismantle this machine of torture in IOJK. “Silence is a crime when such torture is openly taking place in any part of the world”, he said.

He added that 25,000 hindus from all over India had been given domiciles of IOJK; and in the same manner, in which Muslim Indians had become second class citizens, Kashmiris had to run from pillar to post just to prove that they were State subjects. “If we don’t stop this now IOJK won’t be a recognisable entity like it is today. 2 million Hindus will be brought in over the coming years” he said.

The president said that India’s non-permanent seat in the UN Security Council would lead to three setbacks in the council. Firstly, it will try to delete the agenda from the UN SC calendar; secondly, they will make efforts to stop us from holding informal meetings on Kashmir; and thirdly, they will imperil funding of the mandate of the UNMOGIP. “As a permanent member of the UN SC, UK can stop this and create a balance in the UNSC”, said the President while speaking to the audience.

He urged the British citizenry and its civil society to lead the campaign of letter writing and awareness-raising on Kashmir in the international realm.

He also thanked MP Steve Baker for his active and vocal role in raising his voice for the Kashmir people by authoring a letter. He urged him to use his clout with 10 Downing Street and the FCO to mobilise the UK towards Kashmir advocacy in both the British Parliament and the UN SC.