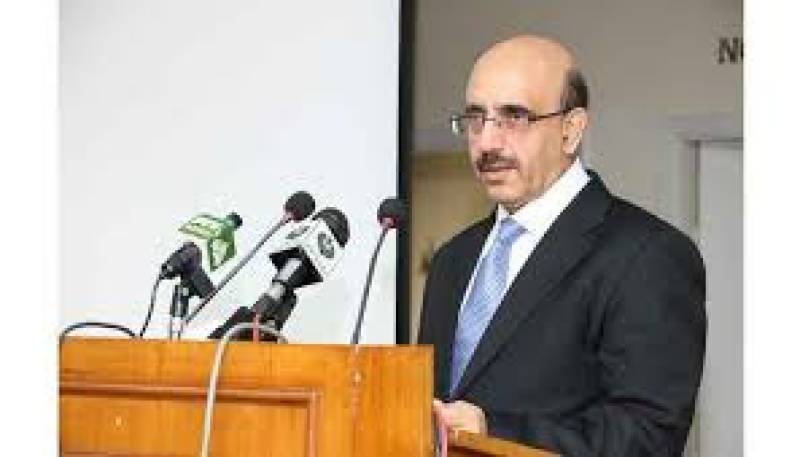 ISLAMABAD-MIRPUR (AJK):Azad Jammu and Kashmir (AJK) President Sardar Masood Khan Monday called upon the British government to fulfill its responsibility to ensure early settlement of the much-delayed Kashmir issue according to the aspirations of the Kashmiri people and urged the Kashmiri community of the UK to use their leverage for the solution of the problem.

Addressing a National Councilors’ Conference organized by President Tahreek-e-Kashmir UK Faheem Kiyani on the topic of “Brutal Lockdown and Demographic Changes in Kashmir”, he said the UK being a permanent member of the United Nations Security Council and forbear of human rights has the responsibility to brief the others, permanent members of the council about the irredentism in IOJK and mounting humanitarian crisis in the region.

The event, first of its kind, participated besides others by elected members of over fifty members of different City Councils and Boroughs from across the UK was moderated by Uzma Rasool and also addressed by prominent Kashmiri Hurriyat leader Altaf Ahmed Bhatt and Raja Faheem Kiani.

Speaking as Chief Guest of the event, President Sardar Masood Khan urged the Kashmiri leaders to accelerate their efforts and mobilise British Parliamentarians through cohesive efforts to raise the Kashmir issue.

“I appeal to you to mobilise public opinion in the UK and beyond by relating that in the last century it was a crime to be a Jew in Nazi Germany and now Muslims in India and occupied Kashmir are facing the same persecution at the hands of BJP-RSS fascist regime,” Khan said.

The President exhorted the Diaspora community leaders to play their due role in raising the Kashmir issue effectively in the British Parliament, civil society and the media and approve resolutions in their respective councils in favour of Kashmiris peoples’ inalienable right to self-determination and against  Indian atrocities and monstrosities in IOJK.

Khan noted that many electoral constituencies in the UK have a strong Kashmiri population and the Kashmiris constituents can persuade their elected MPs in the British Parliament to help push the Kashmir issue forward for its peaceful resolution as the conflict has posed a serious threat to peace and security of the region.

“Your outreach within your councils and constituencies is very significant. It's time to work at the grass-root level to draw global attention towards the horrendous human rights situation in Indian Occupied Kashmir and stem the genocide taking place in the occupied territory,” he added.

Urging the elected representatives of the diaspora community to communicate with their lawmakers and write to FCO and 10 Downing Street, President asserted that the UK government should be more firm when it comes to situation in IOJK and they should not hide behind the frivolous argument that the Kashmir issue is a bilateral matter between India and Pakistan.

Referring to the history of Kashmir freedom, President Khan said Kashmiris have been fighting for the freedom and liberty for past 200 years but their plight became more complex after India's occupation of Kashmir in 1947.

“Kashmiris have been facing massacres and mayhem in the hands of the occupying army since India occupied the territory 73 years ago. A holocaust took place in 1947 leading to the brutal murder of 237,000 Muslim Kashmiris that resulted in a major demographic change in Jammu region of the occupied state, he said.

Now India, AJK President said, under the garb of double lockdown is transforming the demography in Kashmir Valley. After the occupational lockdown the 700,000 troops present in IOJK were beefed up to 900,000 and there has been an incessant communication blockade across the occupied territory.

The reaction to the August 05 move of Indian government came from world parliaments, civil society and media, questioning the legitimacy of Indian action to colonize Kashmir and even United Nations called the communication blockades imposed by New Delhi in Kashmir as a tool to curb expression and other fundamental rights of the people.

But unfortunately, the reaction lasted only for three months partly because of Brexit in the UK, President’s Trump’s impeachment and later due to outbreak of COVID-19. However, he expressed his deep gratitude to the UK’s public opinion leader parliamentarians and the diaspora community for mobilising support for the oppressed Kashmiris by organising massive rallies and calling out human right crimes committed by India in IOJK.