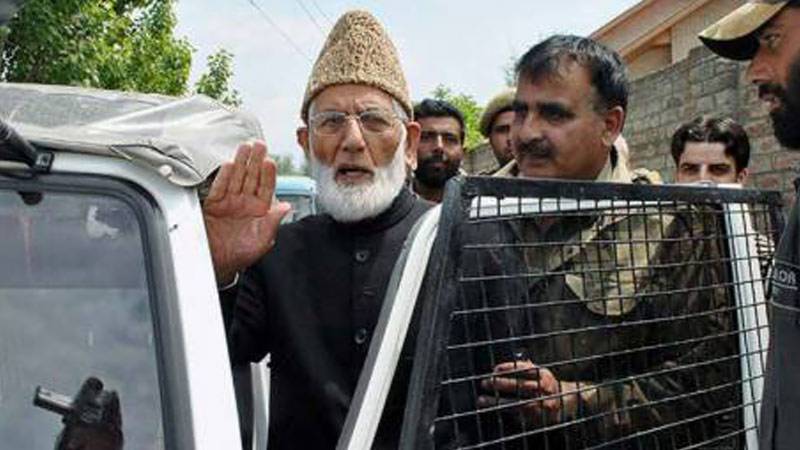 The police took Syed Ali Gilani into custody as he defied his house arrest and tried to march towards Badami Bagh Cantonment as part of joint resistance programme, KMS reported

Syed Ali Gilani, Mirwaiz Umar Farooq and Muhammad Yasin Malik have jointly given the call for the march towards Badami Bagh Cantonment to hand over a letter to the General Officer Commanding of 15 Core of Indian Army, asking the Indian forces to vacate Jammu and Kashmir. They have also asked the people of occupied Kashmir and all over the world to mail the letter, which was released by Syed Ali Gilani yesterday, to Indian Armed forces and paramilitary forces.

The arrest of the APHC Chairman triggered forceful demonstrations in Hyderpora area of Srinagar. The protesters raised high-pitched anti-India and pro-freedom slogans.

On the other hand, the authorities detained Mirwaiz Umar Farooq at Cheshma Shahi Sub-jail in Srinagar while other leaders including Muhammad Yasin Malik, Shabbir Ahmed Shah, Bilal Siddiqui, Mukhtar Ahmed Waza and Zafar Akbar Butt remain under house arrest or in police custody. The authorities have deployed Indian troops and police personnel in strength in Srinagar and other major towns while all roads leading to the Badami Bagh cantonment have been sealed.

The actions are aimed at preventing the leaders from leading the march.