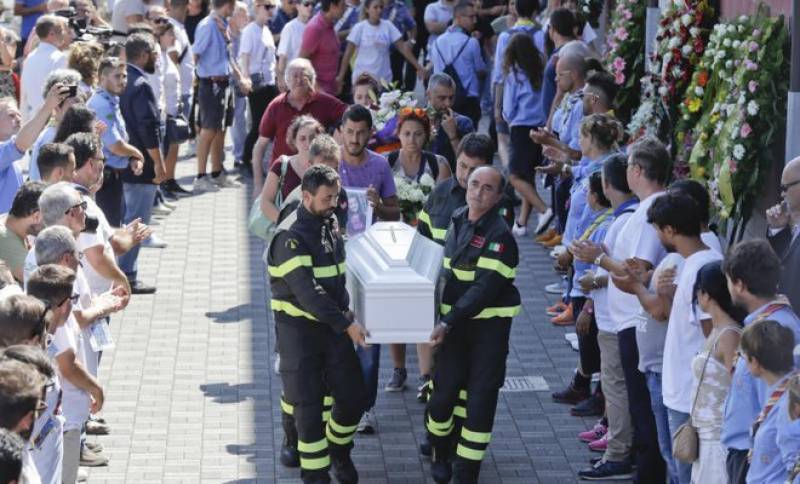 ASCOLI PICENO: (APP) Italy held a tear-drenched funeral Saturday for dozens of its earthquake victims as the country observed a day of mourning over a disaster that killed nearly 300 people.

President Sergio Mattarella, Prime Minister Matteo Renzi and other leaders were among hundreds of mourners who sat solemnly behind 35 coffins in a sports hall in Ascoli Piceno.

The hall in the capital of the Marche region had been converted temporarily to a place of worship for the funeral of most of the people who perished in the villages of Arquata del Tronto and Pescara del Tronto in the region's mountainous interior.

Hundreds more stood silently outside, the sombre proceedings of the mass relayed to them by loudspeakers.

Relatives of the dead sat alongside the flower-bedecked coffins, some draping themselves across them and sobbing inconsolably, three days after the deadly earthquake struck before dawn.

Others hugged each other tight as Giovanni D'Ercole, the bishop of Ascoli, implored them not to lose faith.

"Don't be afraid to scream your suffering, but do not lose courage," he said.

"Together we will rebuild our houses and churches, together above all we will give life back to our communities ... the village bells will ring once more."

Among the coffins was a small, white casket for nine-year-old Giulia, whose body protected her younger sister, Giorgia, for long enough for the five-year-old to be pulled from the rubble virtually unscathed.

Giorgia was one of the last survivors to be rescued and there have been no reports of anyone else being found alive since late Wednesday.

On her sister Giulia's coffin a little note had been left that stated: "Ciao little one. Sorry that we arrived too late." It had apparently been left by one of the workers involved in the rescue operation.

"Giulia died but she was found in a position protecting Giorgia ... life and death came face to face and for Giorgia, life won," the bishop said.

Mattarella, Italy's head of state, had earlier paid tribute to the "extraordinary effort" of more than 4,000 rescue professionals and volunteers on a brief visit to Amatrice, the small mountain town hit hardest by the quake.

Some 230 of the quake's 290 confirmed victims were buried under tonnes of collapsed masonry in the popular beauty spot's devastated centre.

Three more bodies were plucked from the town's Hotel Roma overnight and there are fears there are still more bodies to be recovered.

Amatrice was packed with visitors when the powerful quake struck in the early hours of Wednesday.

Nearly 400 people have been hospitalised since then, some of them with life-threatening injuries.

Emergency services are more confident that they have accounted for everyone in the smaller outlying hamlets to the north of Amatrice -- some of which have been so badly damaged there are doubts as to whether they will ever be inhabited again.

"Saletta will disappear like so many tiny places," predicted Marco Beltrame. The 28-year-old lost his aunt and uncle when the quake struck their one-street hamlet.

The first grieving families to bury their dead did so on Friday evening in Pomezia.

There were also tearful scenes there as hundreds of residents of the small town south of Rome turned out to pay their respects to lost relatives, friends and neighbours who included an eight-year-old boy.

A large number of the victims were from the Rome area, where many former inhabitants of the mountains have moved for work, returning to family homes only at the height of summer.

At least 16 foreigners died: 10 Romanians, three Britons and one each from Canada, El Salvador and Spain.

Sixteen Romanians are unaccounted for, the foreign ministry in Bucharest said Saturday.

With emotions still raw, some families chose not to take up the offer of state funerals.

Renzi has declared a state of emergency for the regions affected, releasing an initial tranche of 50 million euros ($56 million) in emergency aid.

The total rebuilding operation is forecast to cost over a billion euros.

Another major commemoration service has been scheduled for Wednesday in Amatrice. Once that is over, the government and local authorities will face intense scrutiny over why so many people died, just seven years after an earthquake in the nearby city of L'Aquila left more than 300 people dead.