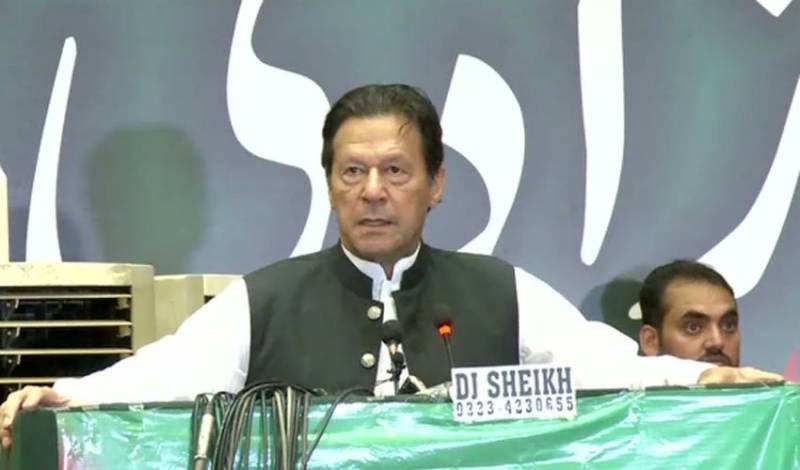 *LAHORE - Former prime minister Imran Khan has said that the imported government has been imposed on the country under a conspiracy.*

Addressing workers at Aiwan-e-Iqbal on Wednesday, he said that America will control the country under the conspiracy. "The coterie of thieves will enslave the country to conceal its theft," he maintained.

He asked the people to support him to save the country. "About two million should reach Islamabad when I give the call to reach Islamabad," he added. "Properties of these 'Cherry Blossom' are lying abroad.

He announced to offer special payer for real independence on Thursday night.

Imran Khan said that one of country's leaders lost lives 80,000 people on one call of America. "America changed the regime along with our 'Mir Sadiq' and 'Mir Jaffar'. America has been purchasing politicians in the past. There was historic growth rate and minimum deficit during our tenure. According to the World Bank, there was minimum unemployment in the country as compared to the region," he maintained.

He said that the opposition was not ready to accept cypher. "The no-confidence motion was tabled a day after the cypher."

The PTI chairman said that Musharraf had given the NRO I and all cases of Zardari would be quashed under the NRO II. "In the poor countries, small thieves are sent to jail while big thieves are spared," he added.

He said that all judgments of the ECP are announced against the PTI. "After assuming the power, we asked the ECP to hear all foreign funding cases simultaneously. They know that the PTI is the biggest political party and they could not jointly defeat it," he added.