Journalist Arshad Sharif was trailed by Pakistani killer squad because of his investigation against money laundering syndicate: Kenya media
26 Oct, 2022 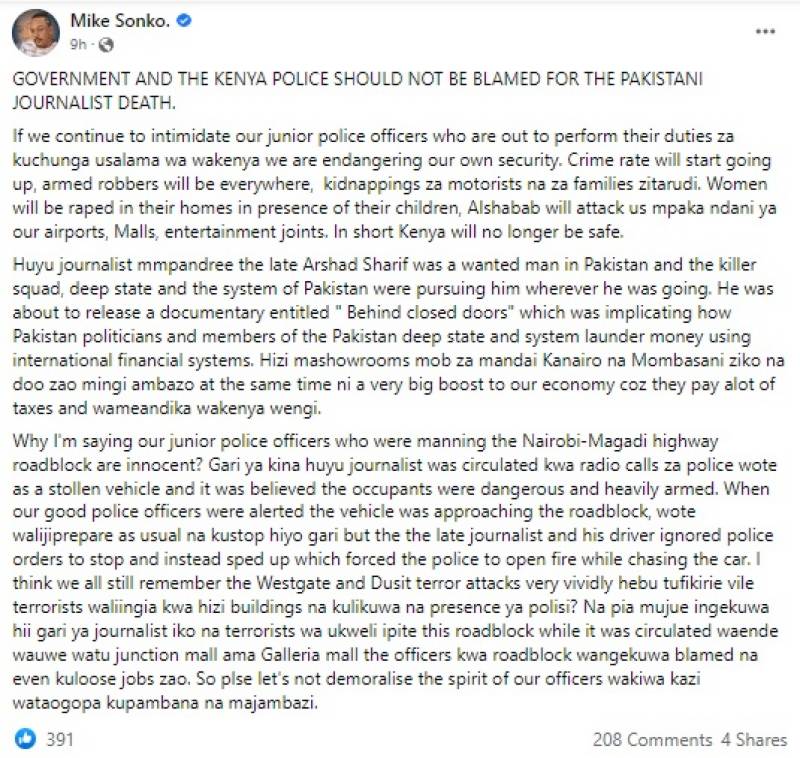 The former Nairobi governor claims that Sharif was being trailed by a Pakistani killer squad because of an investigation he was doing that was allegedly going to expose a money-laundering syndicate that operates car showrooms in Nairobi and Mombasa.

"*Huyu journalist mmpandree the late Arshad Sharif was a wanted man in Pakistan and the killer squad, deep state and the system of Pakistan were pursuing him wherever he was going. He was about to release a documentary entitled " Behind closed doors" which was implicating how Pakistan politicians and members of the Pakistan deep state and system launder money using international financial systems. Hizi mashowrooms mob za mandai Kanairo na Mombasani ziko na doo zao mingi ambazo at the same time ni a very big boost to our economy coz they pay alot of taxes and wameandika wakenya wengi*," Sonko wrote in a post on Facebook. link Kenyan police innocent

Sonko insists that the police officers in Kajiado county who shot Arshad Sharif are innocent because they were 'tricked' into shooting the Pakistani journalist.

The former Nairobi governor says that officers were instructed through police radio that a stolen vehicle was travelling towards Magadi and that the occupants were armed and very dangerous.

He said that the cops, who were manning the roadblock where the vehicle carrying the Pakistani journalist was shot at, had no option but to open fire because they believed they were stopping dangerous individuals from fleeing.

"*Why I'm saying our junior police officers who were manning the Nairobi-Magadi highway roadblock are innocent? Gari ya kina huyu journalist was circulated kwa radio calls za police wote as a stollen vehicle and it was believed the occupants were dangerous and heavily armed.*

"*When our good police officers were alerted the vehicle was approaching the roadblock, wote walijiprepare as usual na kustop hiyo gari but the the late journalist and his driver ignored police orders to stop and instead sped up which forced the police to open fire while chasing the car.*