Pakistan to further deepen partnership with EU
26 May, 2021 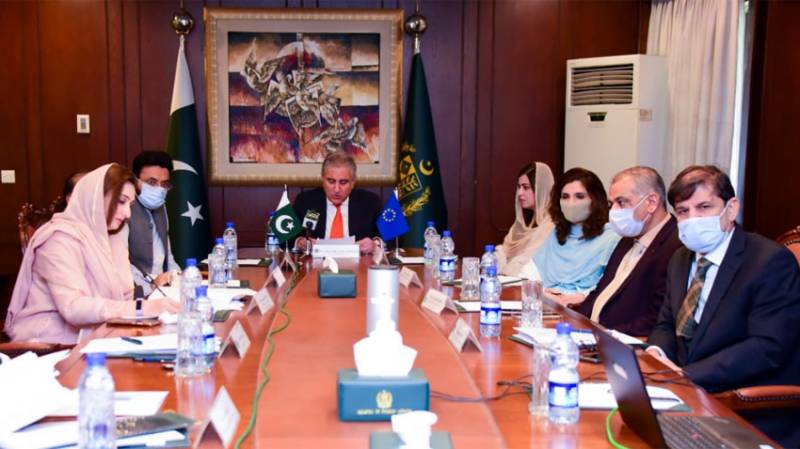 Addressing virtually the European Parliament's Foreign Affairs Committee on Wednesday, he said Pakistan considers the EU a highly valued partner and remains open to engagement on all issues.

He said the GSP Plus has supported Pakistan's exports and it has introduced reforms to attract foreign direct investment to maximally utilize this facility.

Shah Mahmood Qureshi said Pakistan offers an open and deregulated market with 100 percent equity ownership and repatriation of capital and dividends. Our IT sector is brimming with talent. Over the last five years, IT exports have increased by 151 percent. The EU can benefit from Pakistan’s human resource in the IT sector to realize its goals of Digitization.

He said investments from the EU member states in Pakistan’s export promotion zones could create a win-win proposition.

The Foreign Minister expressed his disappointment over the adoption of a resolution by the European Parliament on blasphemy laws in Pakistan. He said this discourse in the European Parliament reflected a lack of understanding of blasphemy laws and associated religious sensitivities. He said we need to appreciate the religious sentiments attached to the personality of the Holy Prophet (PBUH) and other religious symbols.

He said like every other democratic and free society, we value freedom of expression. However, it should not be abused to hurt religious feelings of others. Willful provocations and incitement to hate and violence must not be allowed and be universally outlawed.

In the regional context, the Foreign Minister said Pakistan believes in the policy of restraint and peaceful coexistence.

He said Pakistan remains firmly committed to improving relations with all its neighbours, including India. Unfortunately, our overtures for peace were not reciprocated by India. The Jammu and Kashmir dispute is indeed the single biggest obstacle in the way of building a durable and lasting peace in South Asia. He said a solution in accordance with the relevant UNSC resolutions and the wishes of the Kashmiri people is indispensible.

He said EU Disinfo lab unearthed India’s nefarious activities and we continue to urge EU authorities to take notice of this massive misinformation campaign against Pakistan and not let third countries misuse the name of EU institutions.

He however said there are elements, both inside and outside Afghanistan, which do not want peace and security. We should remain vigilant of machinations of such spoilers. He said Pakistan-EU cooperation would be important in preserving the political, economic and social gains of past two decades, as well as rehabilitation of the Afghan refugees.