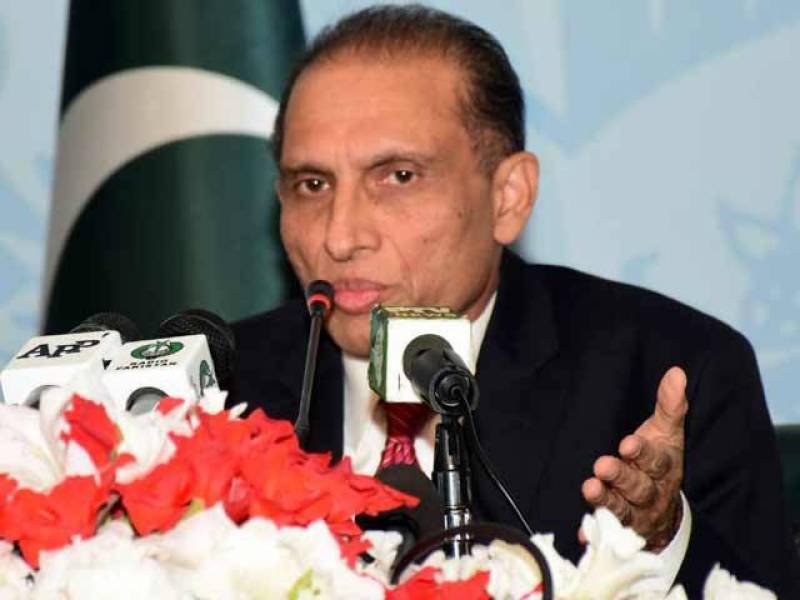 Talking to PTV, the Foreign Secretary said it was not only China but many other states also feared that consideration of Indian application single-handedly would hit a blow to the NSG's objectives which had been established in the aftermath of the Indian nuclear tests in 1974.

He said the debate on NSG membership had been going on since a year and Pakistani authorities were in contact and successfully conveyed its point of view to all the member states.

He said since the beginning, Pakistan's stance was that it would disturb the strategic stability in the South Asian region if Indian application of NSG membership was considered single-handedly.

He viewed that India had misused the waver granted by the NSG in 2008 and any further favour would bring strategic imbalance between Pakistan and India. Contrarily, he said Pakistan acted responsibly and ensured security of its nuclear program through a centralized command and control system.

Aizaz Chaudhry said besides China, many other states also adopted a principled stance that membership to non-NPT India would be the violation of NSG's own agenda.

Commenting about Pakistan's membership of Shanghai Cooperation Organization, the Foreign Secretary said the country had signed the Memorandum of Obligations that would be ratified by the respective parliaments of six SCO members.

He said Pakistan would also ratify some agreements with the SCO and the country would join the next session as permanent member.

To a question, he explained that SCO mainly focused at economic linkages and that it would bring good news for the people of the whole region. The SCO would also prove beneficial for the investment in the industrial zones to be established under the China Pakistan Economic Corridor, he added.

To a question, he reiterated that Pakistan was ready to discuss each other's concerns with India on dialogue table but without any pre-condition and on the basis of mutual respect.

He said Pakistan had made it clear to the US administration that any compromise on country's nuclear program was non-negotiable however the matters like nuclear safety and arms control could be deliberated over.

He said Pakistan's nuclear program was solely aimed at deterring any aggression from Indian side.

Regarding the issue of border management with Afghanistan, Aizaz Chaudhry said both the countries had agreed for a mechanism to discuss the issue. Moreover, Pakistan had also urged the Afghan government to discuss the return of Afghan refugees staying in Pakistan for decades.

To a question about the impact of Brexit vote in UK on Pakistani community there, he said Pakistan respected the decision of the people of the Kingdom; however the cordial ties between the two countries would continue.

He said during their upcoming negotiations, European Union and UK would surely sort out the matter of immigrants who had served a lot for country's development.