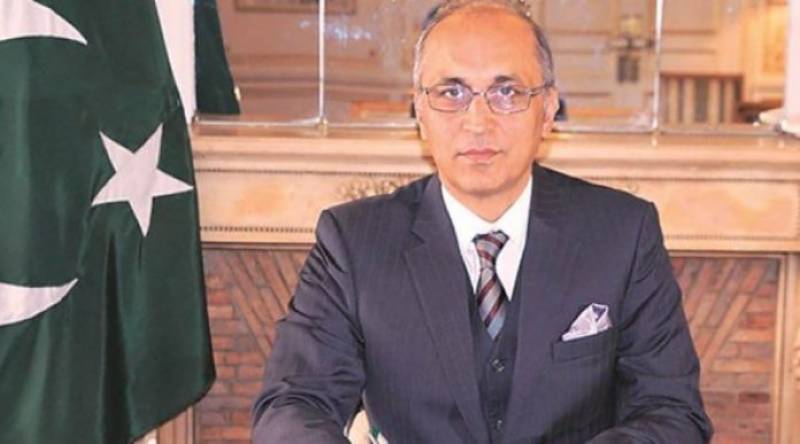 BEIJING:Pakistan Ambassador Moin-ul Haque on Tuesday sought support of the Chinese government and enterprises to improve agriculture sector in Pakistan and expressed the confidence that both countries could turn a new page in agriculture and industrial modernization for shared benefits.

“We are confident that with the support of Chinese government, Ministry of Agriculture and Rural Affairs of China and the Chinese enterprises, we can turn a new page in agriculture and industrial modernization for shared benefits,” he said while addressing the launching ceremony of China-Pakistan Agricultural and Industrial Cooperation Information Platform held online.

He informed that Pakistan government had made agriculture and industrial revitalization a linchpin for its broad-based efforts for the socio-economic development, mitigation of climate change, management of urbanization and national growth and development, adding “so in order to achieve this objective, we look forward to the win-win cooperation with China.”

He remarked that Pakistan and China were all-weather strategic partners and both countries had deepened their engagements in recent years, and expanded bilateral ties in diverse fields of cooperation.

“Ever-increasing economic and trade integration between Pakistan and China has made our two economies, increasingly interdependent,” he added.

He said that as the pilot and high quality demonstration project, China Pakistan Economic Corridor (CPEC) played a pivotal position in the development agenda of Pakistan.

“After the success of its first phase, both sides have mutually agreed that second phase of CPEC would focus on social economic development, industrialization and modernization of agriculture with shared benefits.”

During the visit of President Dr. Arif Aliv to Beijing in March last year, the two countries agreed that agricultural cooperation would be included in the framework of CPEC.

He expressed the pleasure that the relevant ministries and the two embassies were working very closely to meet these goals, envisioned by the respective leadership. Appreciating China’s rapid rise as the world leader in agricultural modernization, he said the last 40 years of reform and opening-up, enabled it to unleash a green revolution by reinvigorating its farmlands for increased productivity and ensuring the well-being of its farmers.

He said that Chinese miracle was worth-emulating for developing countries like Pakistan as it also endowed with fertile land, abundant water resources as well as four seasons allowing it to grow a variety of crops.

He informed that agriculture contributed almost 18% of GDP, provided employment for about 38% of total labor force in Pakistan

“Pakistan is among top producers of wheat, sugarcane, rice and a variety of foods and one of the world’s largest sources of livestock offers great potential for major industries of Pakistan, he added.

On the occasion, he said that today’s launching of this platform had become more important, and momentous as Pakistan and China were celebrating 70-year of establishment of the diplomatic relations. The launching also marked one of the many activities that the two countries had planned this year, he added.

He extended heartiest congratulations to the China Economic Net and the China Machinery Engineering Corporation for taking important initiative for the establishment of this important platform.

“I am confident that this platform would synergize efforts for modernization, expansion of our industry and agriculture and injecting a new impetus to our ongoing efforts,” he added.