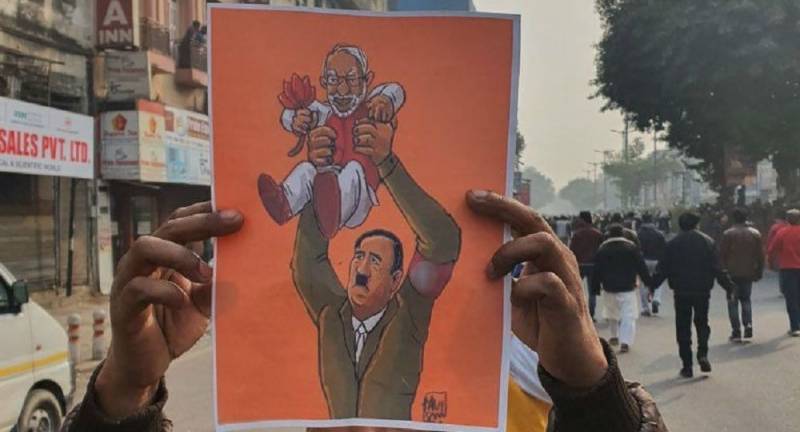 With protests over India’s new Citizenship Amendment Act (CAA) spreading across the country, demonstrators and opposition parties in the nation have started comparing the Indian prime minister and his policies to Germany’s Hitler.

The Indian segment of Twitter is in flames as clashes around the CAA are heating up in the country. Now netizens are furious over a controversial comparison of Prime Minister Narendra Modi with the leader of Nazi Germany Adolf Hitler.

A poster of Hitler carrying Modi in his hands, which was apparently held by one of the protesters, was shown on a German TV channel as it was reporting on the demonstrations over the new citizenship law in India

After the German TV report, a screenshot depicting the poster spread on the Indian segment of Twitter, with netizens lashing out at the comparison.

Questions have also been raised about Modi’s international reputation, which they claim is being tarnished. The picture has garnered 3.8k re-tweets and 9.1k likes.

Other users justified the comparison, with some saying that Hitler’s arms are the best place for Modi. Some called it unfortunate that the Indian prime minister was being compared with a dictator infamous for undertaking ethnic cleansing.

This is not the first time that Modi has been compared to the autocratic dictator for his policies.

Attacking Prime Minister Narendra Modi over increasing unemployment in the country, the former president of the Congress Party, Rahul Gandhi, once remarked: “The Fuhrer promised us Two crores jobs a year. Five years later, his leaked job creation report card reveals a national disaster. Unemployment is at its highest in 45 years. With 6.5 crores youth were jobless in 2017-18 alone. Time for NoMo2Go”.