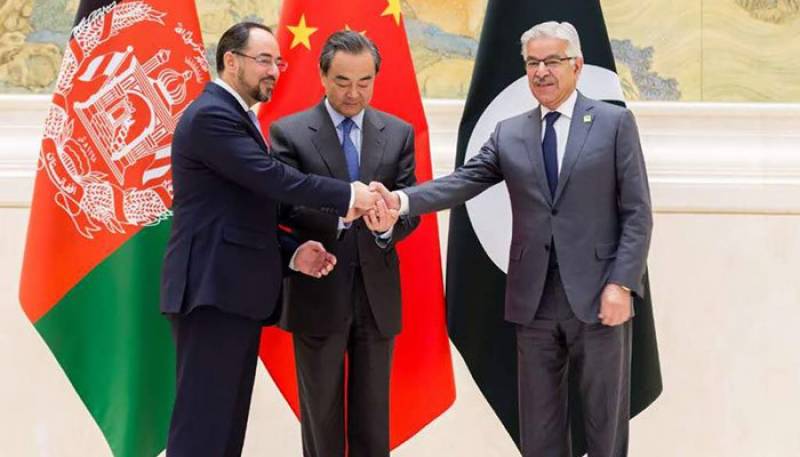 BEIJING: The first trilateral China-Afghanistan-Pakistan Foreign Minister’s Dialogue is being held in Beijing to discuss development, connectivity, security and counter-terrorism.

Foreign Minister Khawaja Asif, who is representing Pakistan at the forum, emphasised that peace is the collective goal of the three neighbourly nations. Peace and development are in the interests of all the three countries, he said.

"Today, realising the common aspirations of peace and development of peoples of our three countries, we have explored ways and means to achieve our shared goals," said Asif.

On the significance of the forum, Asif said that it would lead to "cooperation among our three countries [China, Afghanistan and Pakistan] in the fields of economy, security, counter-terrorism, and connectivity projects that would contribute to peace, stability, economic prosperity, and development in all our three countries."

The federal minister also stressed the importance of resolving the Afghan issue. "We underscored our support to an Afghan-owned and Afghan-led peace reconciliation process for bringing durable peace and stability in Afghanistan."

He remarked: "It was agreed that peace and stability in Afghanistan is essential to realise our shared objective of development, deepening connectivity, and economic prosperity.

Pakistan has emphasised the importance of border management, the return of Afghan refugees and intelligence sharing for effective counter-terrorism cooperation," he said.

"We look forward to [the] response to our proposal for the Pakistan-Afghanistan Action Plan for solidarity and early operationalisation of five working groups. [Afghanistan's] President [Ashraf] Ghani has also referred to the proposal as the basis for a dialogue."

Asif added, "We are convinced that peace and security in Afghanistan is critical for our people to benefit from the fruits of development."

Chinese Foreign Minister Wang Yi expressed optimism about the outcome of the dialogue, which is part of Chinese President Xi Jinping’s initiative for strengthening of relations and developing cooperation between the three countries.

During the dialogue, the foreign ministers of China and Afghanistan also agreed upon inviting Taliban for dialogue.

Afghan Foreign Minister Salahuddin Rabbani remarked that there is no scope for having any terrorist safe havens in the region.

Prior to the start of the dialogue, the spokesperson of Chinese Foreign Ministry, Hua Chunying, shared that the three foreign ministers will have an in-depth exchange on political mutual trust, reconciliation, development, security cooperation and counter-terrorism.

She said as a common neighbour and friend of Afghanistan and Pakistan, China has always supported friendly cooperation between the two countries and their common development.