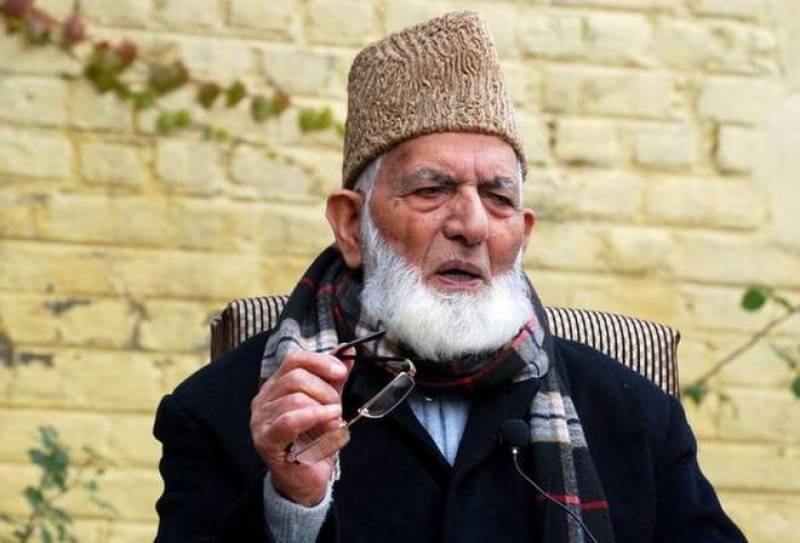 SRINAGAR – Chairman of the All Parties Hurriyat Confe­rence (APHC) Syed Ali Shah Geelani issued a five-point “programme of action” for resistance against the Indian government as lockdown in Kashmir valley continues.

The Hurriyat leader called on the residents of the valley, Indian police officials deployed in the territory, and the Pakistani people to act against what’s going on in the serene valley.

Geelani made the calls in an open letter to the people of occupied Kashmir which surfaced on Sunday and detailed and condemned recent events, including the revocation of special status and a continued communications blackout.

Gillani issued a “heartfelt appeal” to the residents of Jammu and Kashmir to ‘continue to resist […] the naked Indian brutality with courage, urging to organise “peaceful protests and demonstrations” in their areas.

“While doing so, we must remain absolutely disciplined and not give the enemy, who is armed and ready to kill, any excuse whatsoever to hurt our lives and property. It is very important that our demonstrations remain absolutely peaceful so that more and more people are able to join. If the Indian armed forces still attack our gatherings, the entire responsibility for the possible loss of lives and property will be on them, and the world will remain witness to their deeds,” he wrote in the letter dated August 23rd.

Geelani also called on Indian government officials, bureaucrats as well as police officers employed from the occupied region to realise that even when they are ‘hand-in-hand in the oppression of their own people, the Indian State does not trust them’.

He urged them to protest against the ‘humiliation’ meted out to them by the Indian government.

“We have all seen how during the recent events, the Jammu and Kashmir police force was disarmed and the entire command was given to the Indian Army and paramilitaries,” Geelani highlighted.

“Even if such a humiliation does not awaken them to stand up and protest, probably nothing will, and then they should mourn their consciousness and faith, and wait for their destiny of total irrelevance like pro-India politicians in Kashmir.”