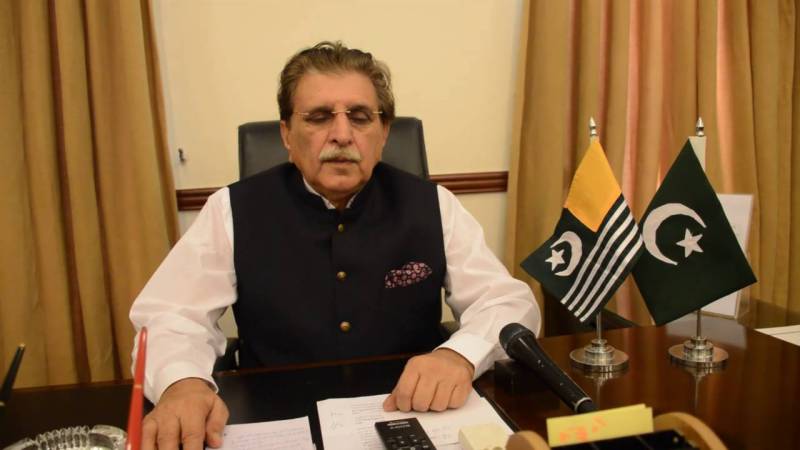 MIRPUR: Describing Pakistan as only ray of hope for the people of Jammu & Kashmir, struggling for their birth right of self determination, AJK Prime Minister Raja Farooq Haider Khan has emphasized the need for forging unity and cohesion to fight challenges confronting the nation.

Speaking at a reception hosted in his honour by Pakistan Muslim League-N, UK chapter at London on Wednesday, he said Pakistan was the greatest gift from Almighty Allah for which forefathers had given sacrifices, according to a message received here from the United Kingdom.

“It is now our responsibility to make conscious efforts for betterment of the country by demonstrating the same kind of spirit and unity to steer the country out of different challenges,” he underlined Commenting on the situation in Indian held Kashmir, the Azad Jammu and Kashmir (AJK) prime minister accused India of turning the valley into a big prison and military cantonment.

Condemning the use of pellet guns and poisonous gas against peaceful protestors, he said the Indian army deployed in the held valley was using poisonous gas and lethal weapons against those who were raising voice against the inhuman act of rape and murder of eight-years old girl Asifa Bano.

Peaceful students of various universities and colleges were being arbitrarily arrested and prosecuted under draconian laws while unarmed civilian population of Azad Kashmir residing along the Line of Control was being targeted by Indian army at the same time, he added.

India, he said, had opened up many fronts against Pakistan and urged the country's political leadership to demonstrate complete unity to foil the enemy's nefarious designs. APP/AFP