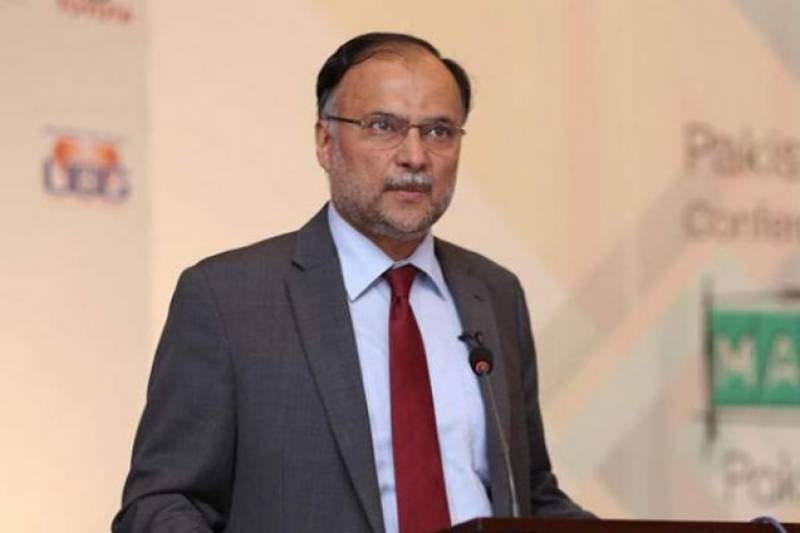 ISLAMABAD: Minister for Planning, Development and Reforms Prof Dr Ahsan Iqbal on Wednesday said youth must commit to enter Pakistan among top ten most development countries by paying focus on their future and work hard.

He stressed upon the youth not to listen those who were discouraging the nation as depressed nations could not achieve any goal.

He stated this while attending the event "Microsoft's Imagine Cup to Pakistan" jointly organized by Microsoft and Higher Education Commission (HEC) held here.

The minister said, "We are the most innovative nation in the world".

"Presently Pakistan has been changed into the most emerging economy of the world from the list of most dangerous countries declared by the western media three years ago," he added.

He said world's reputed organization surveys had projected Pakistan among the top 20 economies of the world in next few years.

A lot of youth schemes had also been initiated by the PML-N, including Laptop scheme, Fee-Reimbursement scheme etc, he informed the participants.

The entire country was being connected through China-Pakistan Economic Corridor (CPEC), he said and added that fiber optic data cable was also being installed from Khunjrab to Pakistan under the project.

"We will train best researchers and scholars through world's renowned universities under the initiative of Pak-US Knowledge corridor. These professionals will give training to the national youth," he added.

He also hailed the Microsoft-HEC initiative for holding Imagine Cup 2017 and announced Rs 1 million for universities working for incumbent research and their students making new innovations.

He urged the HEC to hold international University's Olympic Competition so that Pakistani students could get a chance to work with the researchers of world's renowned educational institutions.

The Director of Microsoft's Enterprise & Partner Group Segment, Abid Zaidi commented on the occasion; "The link between education, attainment and economic growth has never been clearer. Around the world, the communities where educational excellence is a high priority, create the most economic opportunities.The foundation for sustainable economic growth for the future is being laid, through this initiative."

The Country Head of Microsoft, Shahzad Aslam Khan stated: "Talent has no boundaries! Any student can derive great benefits from the Imagine Cup, as it provides world-class opportunities and support for the youth, nurturing their true potential and giving them a chance to do something extraordinary and accelerate growth".

Director General IT, Anwar Amjad appreciated the event and commented that; "The platform provided by HEC to the students is truly unique in as it promises valuable exposure that they need to take the next steps in Academic life, helping them with a successful transition into their professional careers."

The Chairman HE, Prof Dr Mukhtar Ahmed expressed his happiness and said; "We appreciate the valuable support of Microsoft in this initiative, as Higher Education Commission strives to nurture the students' talents through this annual competition. This is a great way to evolve a rich and modern academic culture in Pakistan, as we integrate global advancements and cutting-edge tools to bring the domestic curriculum and learning at par with the leading universities of the world. Thus, we are empowering our students to contribute and compete in the global workforce".

Microsoft and Higher Education Commission (HEC) collaborated to bringMicrosoft's Imagine Cup to Pakistan. It is the world's most renowned technology competition for students. Started in 2003, Microsoft's Imagine Cup is the ideal opportunity for the youthful innovators, from around the world, to give express their imagination, bring ideas to life and win $100,000.

Imagine Cup is held annually by Microsoft Corp., bringing together the young technologists to play their part in resolving some of the world's toughest challenges. Not only a competition, imagine cup serves as a platform for teams to present their solutions to the world. All technology projects are welcome in this competition; it is no longer bound by categories.

HEC's commitment to the academia and students is reflected as Microsoft drives the Imagine Cup to highlighted Pakistan's position on the leaderboards - Pakistan ranks as the TOP country in the Middle East and Africa cluster, with the highest number of project submissions and competitors in Imagine Cup. Pakistan also ranks 5th worldwide, in the same category.

In Pakistan, students from various universities participated enthusiastically, as the competition received an overwhelming response. A lot of remote and underprivileged areas were targeted in the drive for Imagine Cup, particularly Sahiwal, Mianwali, Khuzdar and Jamshoro.

Students were initially evaluated in Regional finals, held in different cities and the best teams competed to win the National Finals. The evaluations for both Regional and National Finals were done according to the rules, regulations and criteria listed in 2017 Imagine Cup Competition.

The winning team of the Imagine Cup National Final from Pakistan was `Positive Zero' from Bahria University, Karachi. The victory was announced during a grand ceremony. The team has built a Microsoft Azure cognitive service-based engine that helps in writing code through voice commands. The team will represent Pakistan in the advanced stages of the competition on a global scale. (APP)