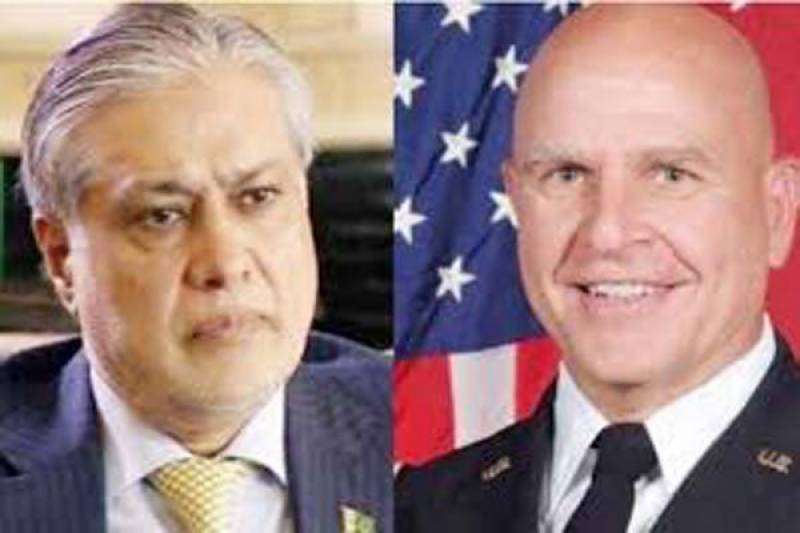 WASHINGTON: Describing regional peace and stability as a mutual goal, Pakistan and the United States have agreed to continue to work to this end during a meeting between US National Security Adviser Lt. Gen. McMaster and Finance Minister Ishaq Dar.

The Minister held a detailed meeting with the NSA at the White House on Tuesday as the Special Envoy of the Prime Minister, and was assisted by the Pakistan Ambassador to the United States Aizaz Chaudhry.

The Finance Minister was in Washington to attend the Spring Meetings of the World Bank and the IMF and also held meetings with senior US official from the State Department and the Treasury Department.

During the meeting with Gen. McMaster, the two sides emphasized the need to have continued engagement on issues of mutual interest.

The Finance Minister highlighted the economic reforms agenda of the Prime Minister which led to the macro-economic stabilization and earned appreciation by the international financial institutions.

Updating the NSA on Pakistan's security situation, the Finance Minister stressed that Pakistan's commitment to fight terrorism from its soil was manifested by the successful conclusion of the operation Zarb-e-Azb which was now being followed by a nationwide combing operation Rad-ul-Fisad.

As a result of these efforts, the incidents of terrorism in Pakistan had significantly reduced, he added.

The US side noted Pakistan's sacrifices in war against terrorism and its support to strengthen Pakistan's counter-terrorism capabilities. Gen. McMaster also briefed the Finance Minister about his recent trip to the region which was aimed to assess the ground situation for the on-going US policy review for Afghanistan.

Meanwhile, the Finance Minister met a group of Pakistani journalists at the end of his visit to Washington and briefed them about his meetings with the US officials and the World Bank and IMF leaders.

The Minister said after completing a successful program with the IMF, Pakistan will not enter to any more programme with the international lending agency as the country's economy was now stable and moving upward.

He said that Pakistan's macroeconomic stability achieved through sustained reforms have been duly acknowledged by the IMF and the World Bank. The economy is now back on the growth path and expected to post five percent growth in the year ending June 30.

The Minister stated that after having achieved the financial and economic stability, the government was now focusing on the social sectors through innovative measures, including Pakistan Development Fund and Pakistan Infrastructure Bank to maintain the higher growth trajectory. (APP)