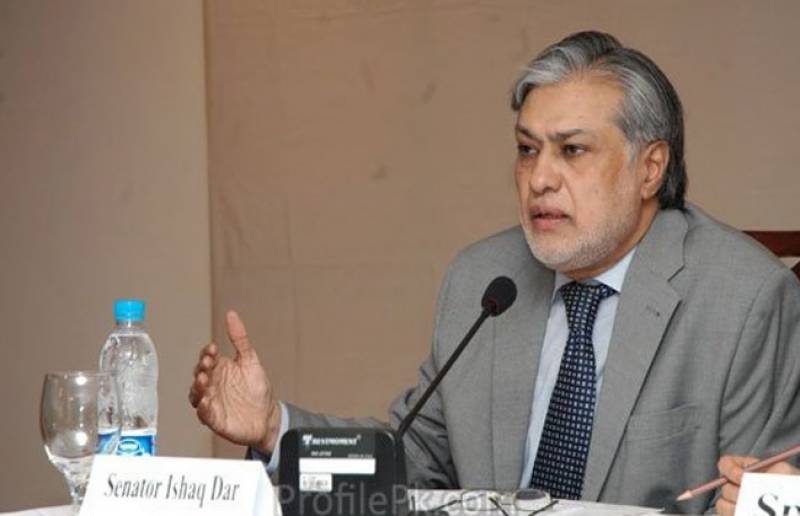 WASHINGTON: The third session of "Pakistan Embassy Forum" was held to highlight economic achievements and draw attention of US investors to the lucrative environment and incentives offered to foreign entrepreneurs.

Pakistan Embassy hosted the forum - titled "Economic Reforms and Revival in Pakistan," which was presided over by Finance Minister Ishaq Dar who was here to attend the Spring Meetings of the World Bank and the IMF that ended this weekend.

The session was well-attended by participants from think-tanks, officials of Washington based organizations and notables of Pakistani American diaspora.

In his address, Finance Minister Dar informed the audience about the structural reforms and fiscal policies undertaken by the government of Prime Minister Nawaz Sharif, which have boosted the overall economic growth.

He said that for the very first time, Pakistan has successfully completed the IMF's Extended Fund Facility Programme which is a complete break from the past. Over the past few years, Pakistan has significantly improved on economy, energy and education.

He said efforts for improved regional connectivity and investment hold promise to Pakistan's economic development and still there is a need to accelerate country's pace of growth to be able to harness the challenges which pose serious threat to the overall economy.

He said the resolution of Kashmir is vital to the regional peace.

The Minister further said Pakistan is looking ahead to work closely with the Trump Administration to further enhance and strengthen bilateral relations between the two countries.

In his opening remarks, Ambassador Aizaz Ahmad Chaudhry dilated upon the importance of the event.

He said Pakistan of today is a resurgent country, going through a momentous transformation on both security and economic fronts.

He expressed his strong hope that with present government's vision and commitment, Pakistan is on the track to record high economic growth and sustainable progress in various socio-economic sectors.

Meanwhile, the Finance Minister also addressed the members of US Pakistan Business Council (USPBC) at US Chamber of Commerce in Washington and informed them about the macroeconomic stability achieved by the government since 2013.

The event was attended by the representatives of large US Multinationals including GE, Boeing, LockHeed Martin, Proctor & Gamble, Monsanto, ExxonMobil, Motorola, Uber, Cocacola and others who greatly appreciated the robust improvement in economic & business environment in Pakistan.

Ishaq Dar said after having achieved the macroeconomic stability, the government was making concrete efforts to achieve sustainable and inclusive higher growth. "The present Government is committed to ensuring transparency in all sectors of the economy and for this purpose, we are working closely with international organizations like OECD etc" , he added.

He said Pakistan's international rating has improved significantly from negative to positive during the span of last four years.

Pakistan's stock market has emerged as 5th best performer in the world which clearly indicates that Pakistan has huge potential for investment, he added.

He told the business gathering that Pakistan has so far introduced 24 laws to make the environment business friendly whereas ten more such laws are in the process.

Stating that Pakistan and the US have long history of strong bilateral relations particularly in the arena of trade, business and social development, Dar urged the US investors to take advantage of the tremendous investment opportunities opening up in Pakistan.

He informed the participants that international companies must consider relocating their manufacturing operations to Pakistan as the country had abundant supply of inexpensive labour and provides convenient access to very large regional market. (APP)