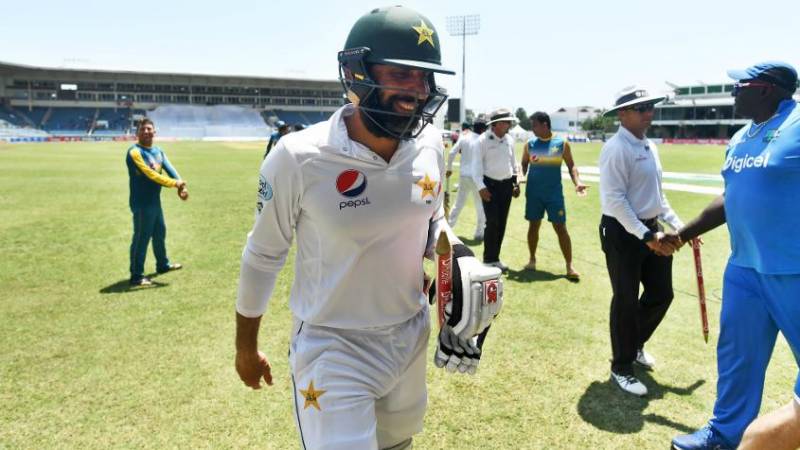 ISLAMABAD: Pakistan Test captain Misbah-ul Haq has gained six slots to reach 20th position in the International Cricket Council (ICC) Player Rankings for Test Batsmen after the first Test against West Indies in Kingston which green-shirts won by seven wickets on Tuesday to take a 1-0 lead in the three-match series.

Misbah, who along with former captain Younus Khan has announced that this will be his last Test series, notched unbeaten knocks of 99 and 12 to put himself in a position to further gain in the batsmen's rankings, in which he attained a career-best sixth position in October 2013, said a press release issued here.

Younus, a former top-ranked batsman, has maintained his eighth position with innings of 58 and six. Among other Pakistan batsmen, Sarfraz Ahmed`s first innings knock of 54 has seen him gain one place to move up to 24th position while Babar Azam has gained 14 places to reach 94th position after scores of 72 and nine not out.

For West Indies, captain Jason Holder's innings of 57 not out and 14 have helped him gain five slots to reach a career-best 60th position while Shane Dowrich (up one place to 63rd position) and Roston Chase (up 21 positions to 70th position) have also reached career-best rankings.

In the ICC Player Rankings for Test Bowlers, leg-spinner Yasir Shah's player of the match effort of two for 91 and six for 63 has lifted him one slot to 15th position while left-arm pace bowler Mohammad Amir has gained 13 slots to reach 42nd ranking after taking six for 44 and one for 20 in Kingston.

For the West Indies, pace bowlers Shannon Gabriel (up seven places to 33rd ranking) and Alzarri Joseph (up 22 places to 73rd ranking) have reached career-best positions after taking four wickets each in the match. (APP)