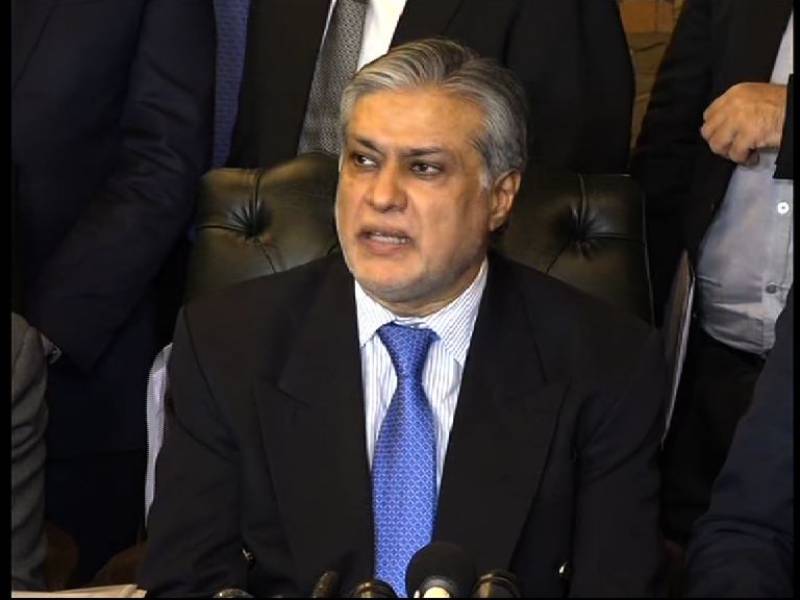 ISLAMABAD: Pakistan has made an impressive headway in Financial and Digital Inclusion, Finance Minister Ishaq Dar said at the press briefing with Pakistani media towards the end of his current visit to Washington DC for attending Spring meetings of the IMF and World Bank.

During five-day visit in Washington DC, Finance Minister Ishaq Dar attended the mandatory meetings of IMF and WB along with more than two dozen meetings on sidelines with officials of the State Department, Thinktanks and members of the Pakistani diaspora.

The Finance Minister gave a detailed round-up on the plenary sessions with the IMF and World Bank during the press briefing.

He said there was a positive sentiment about the tremendous economic rebound, experienced by Pakistan over the last four years.

"Pakistan was at the verge of bankruptcy in 2014 and today Pakistan is likely to achieve approximately 5% growth rate during the current financial year", he said. "Both IMF and WB are on the same page with the Pakistan government in these projections," he added.

The global credit rating agencies have upgraded the rating of Pakistan from `negative` to `stable` and from stable to `positive` over the last four years to an extent that the country is likely to be included in G-20 countries by 2030, he expressed the optimism.

Senator Ishaq Dar said Pakistan has successfully completed the IMF programme first time ever and was now considered as a case study of economic turnaround due to prudent fiscal & monetary policies and macro structural reforms.

During the course of discussion, the minister outlined the important financial initiatives to be undertaken by the government in near future.

He said Pakistan Infrastructure Bank would be established with a paidup capital of one billion dollars. It would finance private investors in development projects, he added.

He said both IMF and Pakistan government would have 20% shares each and the rest would be met by international organizations such as IFC.

He also mentioned that the government has entered into consultation with the World Bank to introduce solar energy as a new electricity generation alternative at a lowest cost in Pakistan.

On the last day of the visit, Finance Minister Senator Ishaq Dar had a detailed meeting with the US National Security Advisor Lt.Gen. McMasterat the White House.

During an hour-long meeting, he had a comprehensive discussion on topics such as defense and security, counter-terrorism, economy, Kashmir, regional connectivity, trade and finance etc.

The Finance Minister highlighted the economic reforms agenda of the Prime Minister and updated US NSA on Pakistan's security situation.

The Finance Minister Ishaq Dar reiterated that Pakistan would not allow its soil to be used against any country and at the same time, Pakistan expects the same level of commitment from other countries in the region.

In response to a question related to the verdict in Panama Papers case, Dar said PML(N) government has honoured the decision of the Apex Court and would welcome the formation of JIT within next 07 days in line with the judgement.

Towards the end of the briefing, Minister Dar emphasized that Pakistan has now emerged as a lucrative investment option for international investors and urged US multinational giants to consider Pakistan for establishing labour-intensive facilities in the South Asian region. (APP)