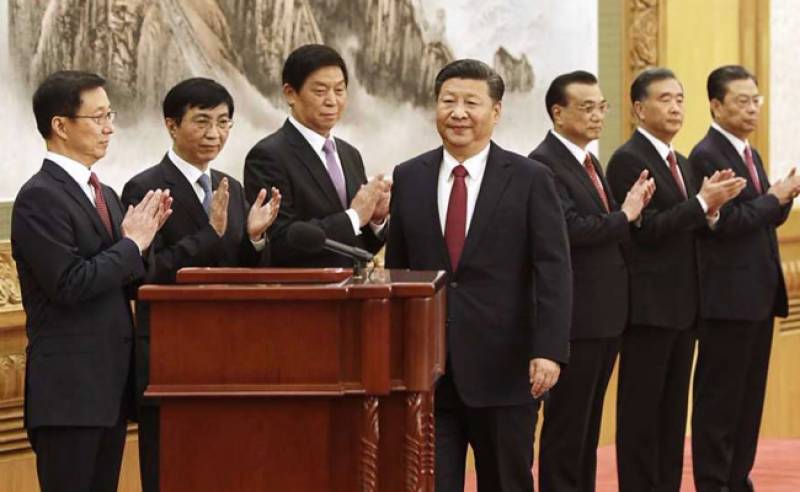 BEIJING - President Xi Jinping walked onto the red carpet of China's Great Hall of the People on Wednesday having amassed more power than any leader in a generation.
Behind him followed -- in order of rank -- the other six members of the Politburo Standing Committee, the panel that meets weekly to manage the affairs of almost one-fifth of the world's population. The new line-up chosen after the Communist Party's twice-a-decade congress surrounds Xi with loyalists to advance his ambitious plans to cement one-party rule and complete China's reemergence as a great power.Here's a look at the officials who will run China for the next five years, in the order they appeared: Xi Jinping, 64

For Xi, the party congress was a crowning moment. The enshrinement of his name in the party's charter capped a decades-long journey from being forced to live in the countryside under Mao Zedong to becoming a leader on par with him. In his first five years in power, Xi has demonstrated vast ambitions to restore China's place among the great powers, laying out a three-decade plan to finish the job. His changes to the party's governing documents -- and the lack of a clear heir -- position him to rule China for years to come.Li Keqiang, 62Once seen as a contender for the presidency, Li Keqiang watched Xi win the top job and instead became premier. The job appeared a natural fit for Li, who holds a Ph.D in economics and served as top lieutenant to former Premier Wen Jiabao. He once likened unleashing market forces to "cutting one's wrist." His image took a hit during the 2015 stock market rout and Xi has quickly assumed economic roles held by past premiers. Still, if there's any gap between Xi and Li, outsiders haven't been allowed to see it.Li Zhanshu, 67Not only is Li Zhanshu among an exclusive group of top officials who accompany Xi on diplomatic visits, he's also become the leader's personal liaison to Russian President Vladimir Putin. Before becoming Xi's chief of staff in 2012, Li toiled for decades in rural obscurity. He wrote poetry and held jobs in places like China's ancient heartland of Shaanxi and the rust belt province of Heilongjiang. His ties with Xi stretch back to the 1980s, when they served in adjacent counties in the central province of Hebei.Wang Yang, 62Wang Yang missed the cut for the Standing Committee in 2012, the year his effort to bring the pro-democracy protests in the fishing village of Wukan to a peaceful resolution helped earn him a spot on Time Magazine's most-influential list. He had risen to prominence in an unusually public debate about China's economy. Wang backed a relatively liberal package of policies called the "Guangdong model" that allowed a greater role for non-profits and trade unions. That approach contrasted with Bo Xilai's "Chongqing model," which emphasized social cohesion and the role of the state.Wang Huning, 62After two decades as China's preeminent political theorist and foreign policy guru, Wang Huning has reached the pinnacle of power. The former dean of Fudan University Law School has advised three presidents and helped draft Jiang Zemin's "three represents," which drew entrepreneurs, capitalists and intellectuals under the party's umbrella. As an academic, he studied power transitions and legal systems and advocated the strengths of strong central leadership over fractious democratic systems. His ascent to the Standing Committee dovetails with Xi's increased emphasis on communist ideology.Zhao Leji, 60Zhao Leji has played an instrumental role in Xi's efforts to position allies ahead of the current reshuffle. For the past five years, he has led the powerful Organization Department, which holds sway over appointments to senior jobs across the country, from provinces to central party agencies. Before that, he spent almost three decades climbing the ranks in Qinghai, a northwestern province bigger than Texas at the crossroads of some of the country's largest ethnic groups. He eventually became the country's youngest provincial leader, overseeing the doubling of Qinghai's economy.Han Zheng, 63Han Zheng's ascension from Shanghai to the Standing Committee is all the more remarkable after the shocking 2006 downfall of his then-boss Chen Liangyu amid bribery charges. During more than three decades in Shanghai, Han has overseen the once-gray former colony's transformation into a shimmering monument to modernity. As mayor, he led a $44 billion infrastructure makeover for the 2010 Shanghai Expo. He has faced challenges since taking over as Shanghai party chief in 2012, from runaway property prices to a New Year's stampede that killed 36.