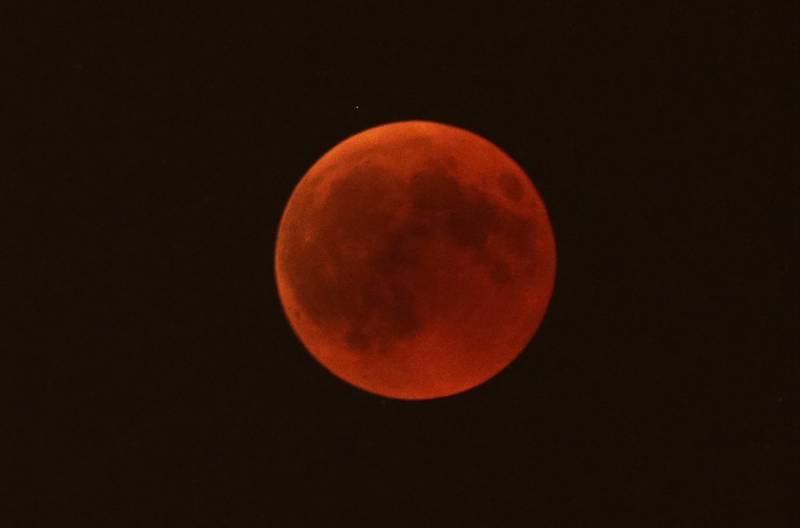 ISLAMABAD- The first lunar eclipse of the Year 2021 will take place on May 26 (tomorrow). It will be the first red moon in nearly two and a half years.

As per details, it occurs within hours of the closest perigee of the year, making the moon appear about seven percent larger than average.

The total phase will be visible near moonset in the western United States (US) and Canada, all of Mexico, most of Central America and Equador, western Peru, and southern Chile and Argentina. Totality occurs just after moonrise along the Asian Pacific Rim.

The eclipse can be seen in its entirety in eastern Australia, New Zealand, and the Pacific Islands, including Hawaii.

In Asia, the westernmost locations to see the eclipse are in India, Sri Lanka, western China and Mongolia, but only the penumbral phase will be visible.

The lunar eclipse, named as ‘Super Flower Blood Moon’ will not be visible in Pakistan due to daylight.

The eclipse of the moon will be started at 11:39am in day.

During the full moon eclipse on Wednesday, due to the moon being closest to the earth, there will also be a super full moon or a Blood Moon.

In the celestial spectacle, the moon will appear to be red for 14 minutes.

As per authorities, a lunar eclipse occurs when the Moon moves into the Earth’s shadow. This can occur only when the Sun, Earth, and Moon are exactly or very closely aligned.

Partial lunar eclipses occur when only part of the Moon’s surface is obscured by Earth’s umbra.